Prestige Italian brand Bianchi have just announced two new road bikes in their line-up for 2011 – the superlight and super high end Oltre and the mid to high end alu/carbon Sempre. And we're the only Brits to have ridden them.

The Oltre is a new entry at number one in the Bianchi range, coming in as their top model HoC (Hors Category) high-performance bike, and featuring a number of aerodynamic features. The designers reckon they’ve developed a strong, stiff and lightweight frame that builds into the best performance road bike Bianchi have ever produced. 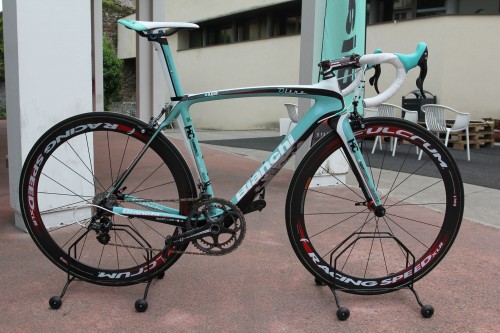 The Oltre – the name means ‘beyond limit’ – is a monocoque design made from ultra-high density carbon composite (unidirectional UMS40, for all the materials boffins) so it should be hugely stiff. Epoxy resin and nano-powder (yes, nano-powder) are added to the mix to reduce the possibility of micro fractures developing. Bianchi call this their Carbon Nano Tube (CNT) technology and they say that it increases the fracture toughness by 49% over standard resin, and 20% higher than their existing nanotechnology.

The Oltre also features Bianchi’s new X-TeX design inside the head tube area. Essentially, this is an internal moulding process that shapes the inner walls of the carbon into a grid-like structure with criss-crossing raised ridges. You know, like a waffle… but made of carbon. The aim is to increase stiffness and impact resistance without increasing the weight of the frame.

The designers have also come up with a wrinkle-free moulding process (WMP) to reduce weight. You know that before carbon is moulded, it comes in rolls a lot like rolls of cotton fabric? Well, when it’s put into moulds, it’ll often wrinkle in certain areas, and the quickest and easiest way to compensate for that is to increase the thickness of the laminate. Bianchi are cagey about exactly how they do it, but by tuning the phases and the parameters of the manufacturing process they’ve avoided the wrinkles without increasing the thickness of the laminate, and so kept the weight down.

The Oltre is a hell of a good looking bike with a slightly bowed top tube that tapers en route to the seat tube, a chunky diamond-section down tube and a huge hunk of a bottom bracket junction. The seat stays are skinny – really skinny – while the seat tube is an airfoil profile, cut-away at the front of the rear wheel.

Like an increasing number of manufacturers, Bianchi have gone down the BB30 route at the bottom bracket – oversized with the bearings sitting internally rather than in external cups – to add stiffness and reduce weight, and they combine a 1 1/8in upper headset bearing with a 1 1/2in lower one for greater rigidity up front. 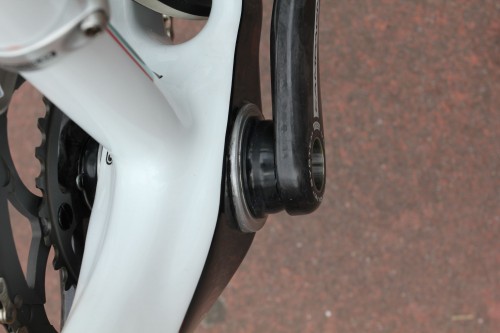 The carbon aero seatpost looks a lot like an integrated unit but it actually works like a standard model although the seat clamp is recessed into the top tube, while the cables are routed internally to improve the airflow. Up front, the fork – carbon, naturally – is straight legged with a winged, aero profile. It weighs 360g, which is pretty darn light for something designed to fit a 1.5in lower headset bearing, while Bianchi are claiming an impressive 950g for the frame itself (size 55cm). 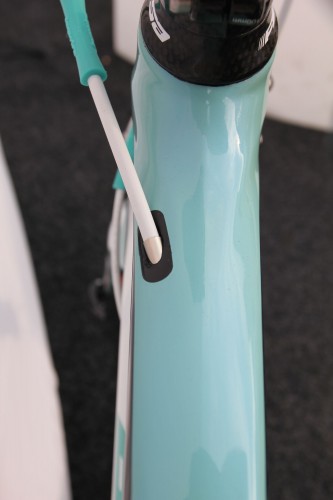 Okay, so that’s the theory; how does the Bianchi Oltre perform out on the road? We’ve been lucky enough to get some good testing in on the hills around Bergamo, northern Italy and we can tell you that this a bike that hits the designers’ targets for high-end performance.

Most obviously, the Oltre is very light, and getting it up to speed isn’t so much a question of coaxing and cajoling – it’s just something that happens even when you’re not especially thinking about it. And the Bianchi’s loves to climb – it feels alive and exciting on the slopes and is always up for a quick surge of pace. (The naked carbon frame in the picture below, by the way, is a prototype model. The real colour schemes are shown in the gallery). Rigidity is a strong point here too. The meaty bottom bracket hangs tough when you get out of the saddle and start jumping on the pedals while the front end is equally solid with very little flex when you start hauling the bars about. The short head tube helps there, or maybe it’s that new X-TeX technology we mentioned. Either way, it feels perfectly sturdy.

The Oltre is impressive on the downhills as well. We like the low, aggressive ride position on the descents – it feels like you’re in attack mode, taking on the terrain rather than simply reacting to it. And it’s really ping-able around the hairpins – okay, we don’t have too many of those in the UK but the same applies to any tight turns. The front end rigidity means you can point and shoot without worrying about any drift, and you have the confidence to get back on the gas that little bit quicker. We were throwing it through the tight stuff and coming out smiling every time.

Do the aero features make much difference to the flat speed? In theory, quite a bit but it’s hard enough to form an impression on that when you’re riding at home never mind on unfamiliar roads.

One thing we will say, though, is that we found the Oltre to be pretty comfortable. It’s not designed to be especially comfy – even Bianchi don’t make any claims in that area – the focus is clearly on performance. But we didn’t have any worries there. Fair enough, it’ll skitter a bit on poor road surfaces rather than soak it all up and we knew all about it over the short section of cobbles on our test route but, as race bikes go, no problem.

We’ve got no word on prices yet but we’re working on it and will let you know as soon as we can.

Oh, and Bianchi’s other new bike, the Sempre? That fits into the B4P (Born For Performance) category that’s designed to provide a racing performance at a more manageable price. And that’s all you’re getting out of us for now. A full report is coming.