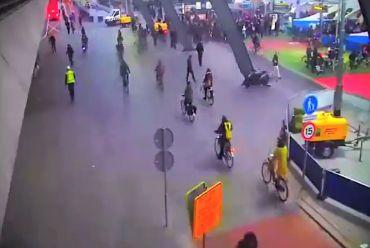 Watch as cyclists, pedestrians and scooter riders dance around each other
by Simon_MacMichael

The city of Amsterdam has released a time-lapse video showing the interaction between pedestrians and people on bicycles and motor scooters in a recently introduced shared space at the city’s bustling central train station.

It’s an arresting site as the station’s users, whether on two wheels or two legs – or four, in the case of the dog towards the end – dance around each other, with the time lapse film exaggerating the speed somewhat.

Used by more than a quarter of a million people a day, Amsterdam Centraal is undergoing extensive redevelopment ahead of the opening of a new metro line next year.

In November, the shared space shown in the video – shot one morning rush hour the following month – was opened by the ferry terminal on the north side of the station, and links to other routes including the bicycle and pedestrian tunnel under the station.

According to the city authorities, the space, which has no traffic lights, pedestrian crossing or road markings, “seems to work well,” with people “slowing down and looking out for each other.”

Cameras have been deployed there as part of a traffic study that will assess whether the shared space is working – and judging by the video, it certainly seems that it is.

It’s reminiscent of a video we highlighted in October showing a steady stream of bicycles in the morning rush hour in the Danish capital, Copenhagen.