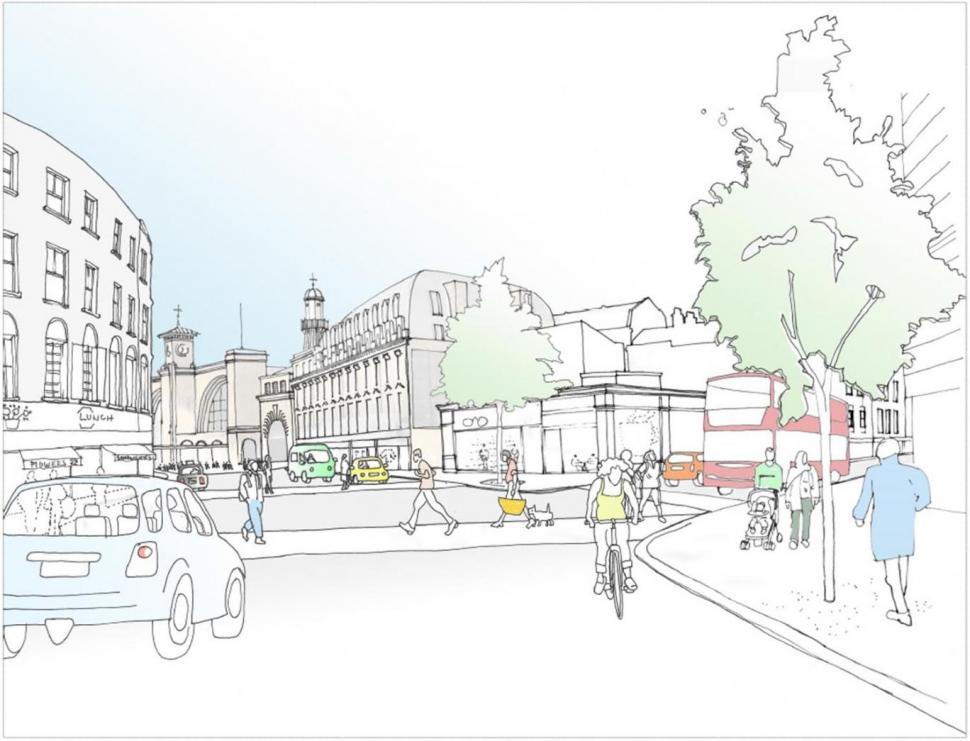 The Kings Cross gyratory in London could become a safer junction for cyclists under radical new plans unveiled by Transport for London (TfL).

The junction, which has claimed a number of cyclists’ lives, will have safety measures built in, as well as improving traffic flow for drivers.

TfL and Islington and Camden councils are now consulting on the plans, which come under the Mayor’s £4bn Road Modernisation Plan to radically transform the way the Capital’s roads and public spaces are used.

The plans will improve pedestrian crossings across the main roads and better connect King’s Cross to the rest of the city. The new North-South Superhighway would link cyclists as far south as Elephant and Castle and also into the Central London Grid, opening up swathes of central London to cycling for residents of King’s Cross and the millions of commuters that use the mainline railway stations.

There are also proposals to improve conditions for pedestrians and cyclists with new crossings and contra-flow cycle lanes.

The plans will also reduce the length of some traffic and cycle journeys by introducing two-way traffic.

And residents will benefit from reduced traffic on quieter streets as the traffic flow on the Euston road improves.

Mayor of London, Boris Johnson MP, said: “King’s Cross has enjoyed a wonderful transformation in recent years, so it is time that the roads and paths experienced the same makeover.

“By simplifying the roads and creating a safer and more pleasant environment for cyclists and pedestrians, we’d see huge improvements for the many thousands who use that area every day. These are bold plans but they are just the first stop on our journey and we’re looking forward to hearing what the public think of our proposed track ahead.”

Leon Daniels, Managing Director of Surface Transport at TfL, said: “King’s Cross has seen a dramatic change from its less than salubrious past to a place that welcomes visitors from Europe and across the UK. Our proposed changes to the King’s Cross gyratory would bring this road network into the 21st century too.

“We welcome people’s views on our proposals, which would help us on the way to remove death and serious injury from London’s roads and get more people walking and cycling.”

The public can respond to the King’s Cross gyratory consultation, which closes on 20 March, here.

TfL will respond to the consultation in the summer.

It is hoped that the new plans are an improvement on a proposal from early 2014, which the London Cycling Campaign (LCC) opposed, saying that the proposals “lack connected and continuous protected cycle lanes or safe passage through the junction in every direction.

“There are considerable risks of potentially fatal left or right 'hooks' by lorries and other motor vehicles turning across the path of cyclists going ahead.

“Elsewhere in the junction, there are lesser risks of conflict with busy pedestrians areas,” we reported them as saying at the time.

LCC said: “There are many small improvements with more and wider mandatory cycle lanes and little bits of protected space.

“However, it will not possible to go through the junction in any direction without being exposed to unacceptable levels of danger.

“Some sections do not even meet the old cycle design standards set out a decade ago.”

In 2011, Min Joo Lee, known as Deep, was killed on the junction by a lorry driver, Terence Gibbs.

Deep, aged 24, died as a result of serious head injuries sustained at the junction of Pentonville Way and Gray’s Inn Road on 3 December 2011.

We reported at the time how Gibbs, who had been driving lorries for several decades, told the inquest in 2013 that the road layout was “outdated.”