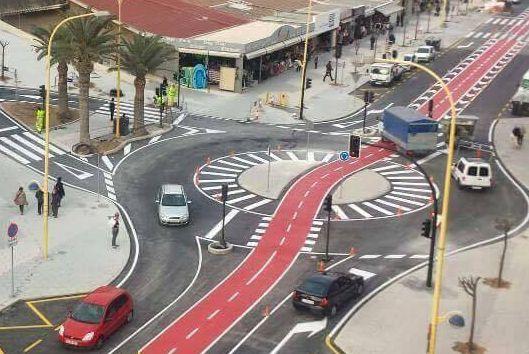 Here's Benidorm's new 'cyclist-friendly' roundabout - what do you think?

We're taking inspiration from Oxford and calling it the hamburger...
by Simon_MacMichael

The Spanish city of Benidorm has introduced an unusual roundabout as part of its aim to grow the share of cycling as a means of everyday transport – but the design suggests it’s one that doesn’t take account of how people actually use bicycles for everyday journeys, and is also likely to put them into conflict with motor vehicles.

A picture of the roundabout being constructed was posted to Twitter earlier this month by Trek Segafredo soigneur Josue Aran Garcia. Recently, the local council announced that it plans to introduce a further 5 kilometres of cycleways within the first three months of the year, bringing the total to 35 kilometres.

Oo my good!! That is the worst thing I've ever seen in my life #benidorm pic.twitter.com/Dpc9rTiwet

As you can see from the image, the cycleway itself is placed between the two lanes carrying motorised traffic in opposing directions.

But it’s the roundabout itself that draws the eye, with the red track continuing straight through it and road markings suggesting that drivers of cars and other vehicles are expected to yield to people on bikes.

Among replies to the post on Twitter attracted was this one from Urban Cycling Living, the account of Dutch urban trend watcher, futurist and designer Stefan Oudijk, pointing out how things are done in his country.

The Netherlands is of course alongside Denmark the country most often cited as best-in-class for cycling infrastructure, and the approach taken to roundabouts there is for cyclists to have a separated lane going around the outside.

As with the example from Benidorm, motorists are expected to give way to cyclists, but the tiny modal share of cycling in the Spanish resort – still just 1 per cent, despite the council’s efforts – will likely mean drivers being far less aware of those on bikes in the first place.

Moreover, Dutch design places cycleways on the outside of the main carriageway, which both engineers out conflict as well as acknowledging that people using a bicycle for an everyday journey won’t be looking to ride the length of a main road, but will be looking to turn off it to access places such as shops, homes and schools.

To anyone familiar with Oxford, the roundabout’s design is immediately reminiscent of Headington’s ‘hamburger’ roundabout (perhaps not by coincidence located by a branch of McDonald’s) – although there, the carriageway cutting through the centre it is primarily used by motor vehicles heading to and from the junction with the M40 to the east of the city.

As we reported yesterday, a planned 'Dutch-stytle' roundabout in Norwich has been criticised by cycling campaigners who have pointed out that the design isn't the type of cyclist-friendly one you'd find in the Netherlands.