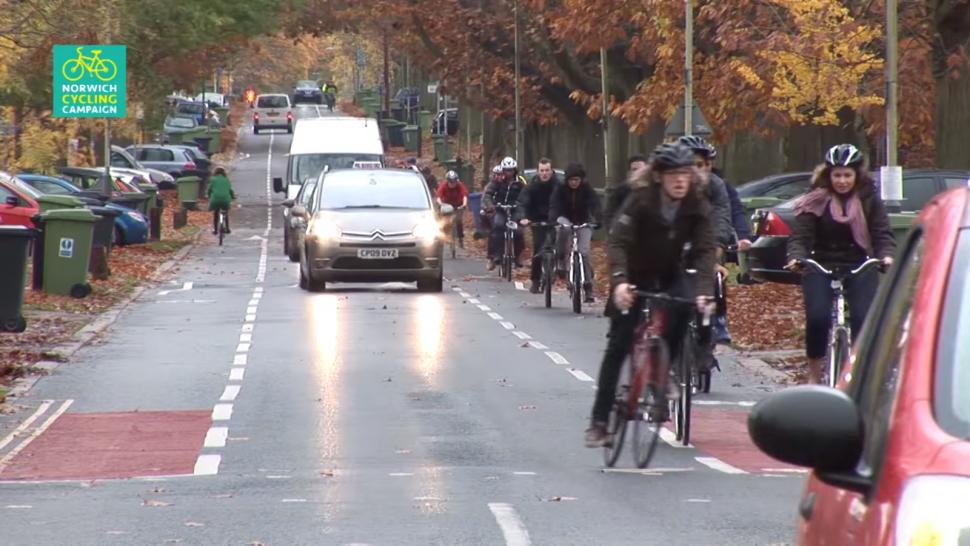 Cycle campaign says designs for Norwich's busiest bike route were changed at the last minute from a raised cycle track to one shared with motor traffic...
by Laura Laker

A Norwich cycle route has come under fire as “useless” and “botched” after it was unexpectedly downgraded at design stage from a raised cycle track to one shared with motor traffic, while fresh sections of tarmac are starting to crack up.

The advisory bike lane was painted onto The Avenues, part of the city’s wider Push the Pedalways scheme, which is paid for by Cycle City Ambition Fund money from government, after the council said tree roots would make a dedicated cycle track too expensive to build.

Norwich Cycle Campaign has expressed surprise at design changes, which it says were made without consultation, as originally bike lanes were to be raised above the tree roots. With the present design cars are forced to use the bike lane in rush hour as the two-way motor traffic negotiates one lane’s width.

The Norwich Cycling Campaign calls the section of The Avenues near the University of the West of Anglia “the busiest cycling street in the city, indeed all of Norfolk”.

In a video critiquing the new route it says “not only do large numbers of people on bikes use it but a lot of motorised traffic, especially at peak times” when, it says, the cycle lane effectively ceases to exist.

It goes on: “The space allocated to motor traffic is only one lane wide, despite the road being two way and carrying large double decker buses”, so that when traffic is approaching from both directions drivers use the bike lanes just to pass one another.

The NCC says cyclists are lulled into a false sense of security by the white lines and the numbers of other cyclists, when the cycle lanes offer no actual protection from traffic.

Norwich is one of the eight Cycle City Ambition Fund recipients, receiving £5.7m in 2013 for improvements to an eight mile 'pink pedalway' and connections to it. A further £8.4m was awarded the city this year to improve more of its cycle routes.

The campaign group has branded The Avenues route “useless” and “botched” and says it fails to provide a safe and convenient route for cycling. It says the changes to the original high quality design came without warning.

“After a long period of consultations and several proposals a plan was announced, which featured two dedicated hybrid cycle tracks, one on each side of the road, and it had the potential to become a showcase scheme and a study case for future project.

“But it was not to be. At the last moment, and without any consultation, the scheme was dropped, and something very different was produced. There would be no dedicated hybrid cycle tracks, just white paint and speed humps.

It says “The speed humps were paid for using the cycle provision money, of course.”

A parallel route was supposed to be improved as part of the scheme but NCC says this has not happened. In the video this route is shown with pedestrians walking in it and with give way markings at side streets and where footpaths cross it.

The NCC praises the clear demarcation of priority of cyclists over traffic at side junctions with red paint and give way lines but says, “why the rest of the cycle lane isn’t red as well is a mystery”.

More recently cyclists have started reporting the surface of the new cycle route have started cracking up and developing large indentations.

A council spokesman told the Eastern Daily Press the surface issues would be dealt with at the contractor’s expense during the normal 'snagging' period.

“As always, this kind of thing, if not dealt with by the contractor before, would be picked up in the ‘snagging period’, which is where we would inspect the work it had carried out and any problems identified would be ironed out by the contractor at its expense.

“There is no reason to imagine this would cause any delay to this piece of the project, which is due to be completed at the end of February.”