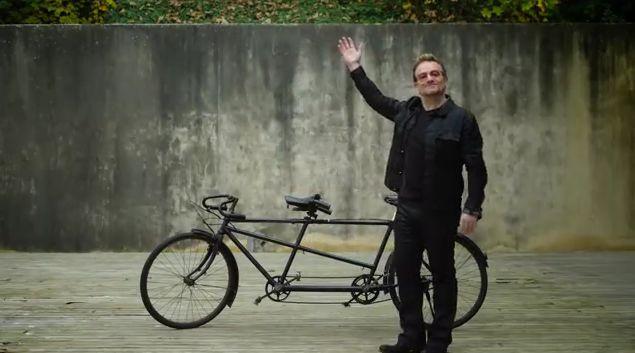 A charity is offering people the chance to have a bike ride with U2 singer Bono around New York City’s Central Park – the very place where he suffered horrific injuries in a cycling accident last year.

The musician is a long-time supporter of AIDS charity (RED), which is essentially raffling the prize in return for donations starting for as little as $10.

That gets you 100 entries in the draw, and various other incentives are on offer for people pledging more money.

The November 2014 crash with another cyclist left Bono having three metal plates and 18 screws inserted in his arm, where his humerus bone had shattered in six places.

He also broke a bone in the little finger of his left hand, fractured his left shoulder blade in three places, and sustained a fractured eye socket.

The description of the competition, hosted on Omaze.com, makes a couple of tongue-in-cheek allusions to the rock star’s crash, which hit headlines around the world:

Forget about jumping out of a plane, scaling Mount Everest, or getting in the ring with Mike Tyson. Bono is bringing you and a friend to New York City to REALLY live on the edge. You’ll meet him for a morning of stories and signed merchandise before embarking on a lovely bike ride through one of the most iconic places in the world. After that (provided you all survive), Bono has one more stop to help you cool off that recent rush of adrenaline: ice cream. We’ll provide your flights and 4-star hotel; Bono will provide the motorcycle helmets.

Yes, it does say “motorcycle helmets,” but this prize is definitely a pedal-powered tour.

Bono himself says in a promotional video for the competition: “We'll ride, we'll laugh, we'll snap a few selfies, talk about our favourite albums, geo-politics, and I'll tell you what it's like to suffer a facial fracture involving the orbit of your eye and having your elbow redone in titanium.

“And enduring the torture of 18 months of physical therapy with a Satanic German physio.