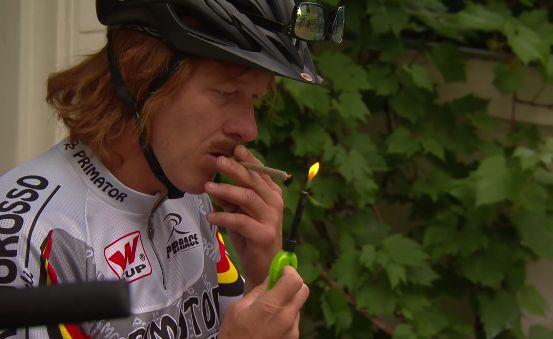 Video: Plan on cycling in Amsterdam? Best watch this first ...

Amsterdam is famous for people going about their daily business on bicycles. And with tourists tempted to follow locals in taking to two wheels, the city’s government wants to let them know how to behave when in the saddle – so naturally, they employed a comedian to tell them.

In this public information film, comic Maxim Hartman dispenses some well-meant advice. The more serious stuff (though still delivered in a tongue-firmly-in-cheek-manner) comes after the mayor’s message halfway through.

And although it isn’t specifically mentioned, we’re guessing the Lycra and helmet are a nod to their absence among the vast majority of Dutch cyclists except the sportier types, and even then only when they are racing or training.

Amsterdam Marketing’s communications manager, Machteld Ligtvoet, told AFP: “We the Dutch people are so used to cycling, but often people from abroad are not.

“And the streets of Amsterdam are often crowded and compact.

“We thought it’s a good idea to do something to inform visitors about how to cycle in Amsterdam,” she added.

And one of the key messages? “Don’t cycle drunk or stoned.” Wise words, wherever you are.

Here’s another take on cycling in Amsterdam aimed at tourists – though more people on foot than in the saddle (caution – contains sweariness).