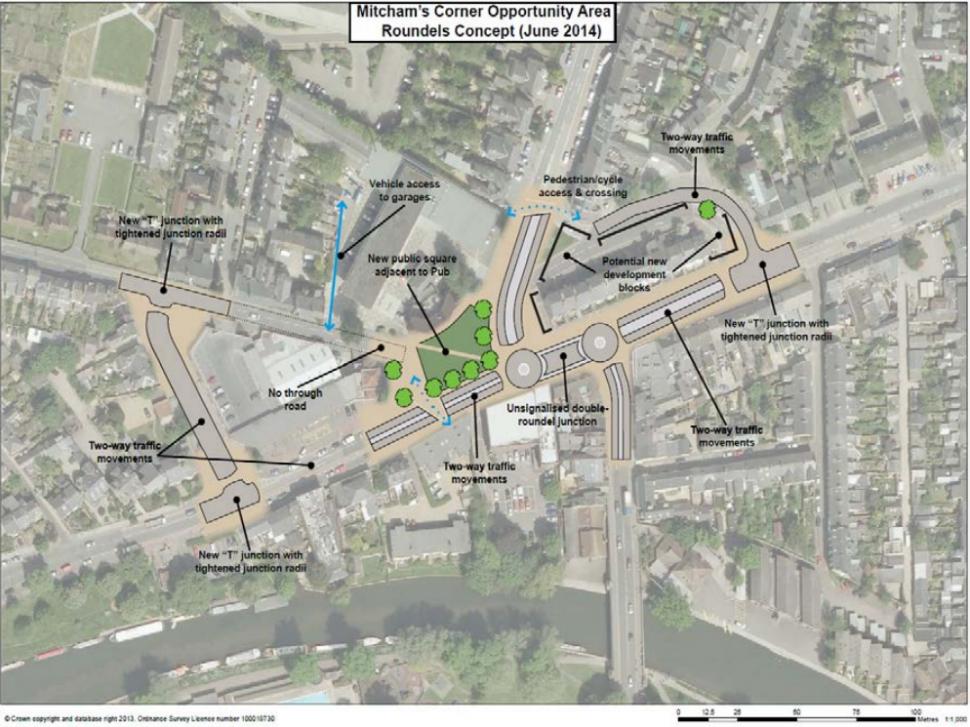 Plans to replace a busy Cambridge gyratory with a “shared surface” unsignalised junction without traffic signals have been branded not radical enough by one local councillor, who would like to see the area prioritise pedestrians and cycles and remove non-essential through-traffic altogether.

Proposals to improve Mitcham’s Corner, which the council’s urban design chief says is currently “long past its sell-by date”, could see an unsignalised “double roundel” (double roundabout) junction introduced on the main road through the area, with traffic prevented from entering some side streets.

However, while changes were welcomed in principal, Cambridge Council’s Cllr Ian Manning said the plans aren’t radical enough, joining cycle campaigners in calling for a trial reduction in motor traffic through the area instead.

At a meeting discussing a concept for the junction, which relies on informal "shared surface" traffic calming measures, Cllr Manning said New York style road improvement trials should be trialled instead.

He said: “I actually don’t think it’s radical enough. We’ve got a policy, through the county council, of trialling much more radical schemes…it would allow you to do things like try blocking off that entire area apart from essential vehicles and completely pedestrianising it”.

He also said changes should be trialled on the street, rather than modelled theoretically.

Cambridge Cycling Campaign's Hester Wells said the plans do too little to improve safety, and could worsen safety for cyclists and pedestrians.

She said: “I’m really pleased that there are these proposals for improvements to Mitcham’s Corner, I think it’s an excellent thing...but I am very worried about the double roundel that is being introduced.

“Shared surface doesn’t stop it being a major through-route for cars. It doesn’t remove the amount of traffic that’s going through it.”

She said blind users and children will struggle to differentiate between road and pavement, and drivers may not slow down enough to make it safe for them to cross.

No modelling undertaken on Mitchams Corner for cycling yet. Motor traffic only. #nac

Council urban design chief, Glen Richardson, pointed out designs are still at concept stage and are not fixed. In response to questions by Councillor Smart, the council lead for cycling, he said cyclists would have to behave like cars to use the roundels, as they do at most UK roundabouts now. He said he understood the scepticism about the double roundels, but believes the scheme can work.

He said: “These kind of concepts take some getting used to and there’s some modification and change in behaviour needed but I can assure you that there are a number of schemes, not just on the continent but the UK, both in London and in Brighton and Ashford, Kent, that have gone this route of shared surface. It has been implemented successfully in a number of areas.”

He also referred to Poynton where a similar scheme was introduced, but Wells argued Poynton is not comparable with Cambridge in terms of cycling numbers.