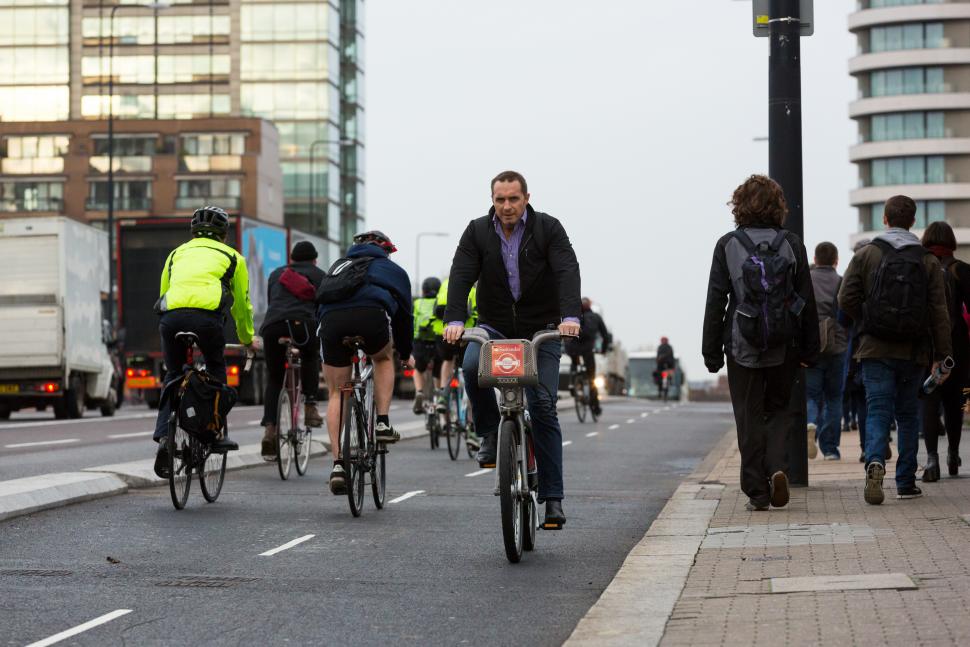 Route will be a "lifesaver" protecting bike riders from one of London's "nastiest" junctions where a cyclist died last year...
by Laura Laker

London’s first fully protected cycle superhighway was opened by London Mayor, Boris Johnson, this morning, providing a route for cyclists across one of the capital’s worst one-way systems, where a cyclist was killed last year.

The 1.4km long Cycle Superhighway 5 (CS5),  from Oval to Pimlico, is the first of the Mayor's cycle superhighway upgrades to be completed, with more to follow in the coming months.

The two way route, which passes through Vauxhall Cross gyratory, will be a "lifesaver", according to the Mayor’s cycling commissioner, who describes the junction as “the nastiest in London”. Since completion the route is being used by more than 750 cyclists in the peak hour, a 29% increase from before construction started six months ago.

The Mayor of London, Boris Johnson MP, said: "We've brought a bit of Amsterdam to the unlikely environs of Vauxhall - opening up access to huge swathes of south London for safer cycling. I've always believed that more Londoners would cycle if they felt safer, and this new route already proves it.

"The astounding rises in cycling through Vauxhall should lay gently to rest any doubts about the need for my new superhighways, the pent-up demand in London for cycling - and the part my cycle lanes can play in taking other vehicles off our crowded streets."

Improving London's cycle superhighways to Continental standards was one of Johnson's election pledges, made in response to campaigners' demands ahead of the 2012 mayoral elections, along with improving London's most dangerous junctions and building three "mini Hollands", showcases of people-friendly streets in outer London.

This morning London’s cycling commissioner, Andrew Gilligan, told road.cc: “I think [CS5] is going to be a lifesaver. This is the nastiest, I think, gyratory in London. As you know a cyclist was killed going round it last year. You just don’t have to do it any more, you can completely avoid the gyratory if you’re going on any of the main routes.”

Before the new cycle route was built, people on bikes made up almost a quarter of rush hour traffic. Since the work was completed that has risen to almost 40%.

Gilligan echoed Boris Johnson’s comments that the increased numbers prove if you build it, they will cycle.

Andrew Gilligan: detractors of cycling programme will be embarrassed once they see benefits

Gilligan said: “It’s a sign that what we’ve been saying all along is right … build it and they will come. We always knew there were thousands of people out there who wanted to cycle, if only they felt safer doing so, and this is doing that, this is proving that we can take journeys off the roads, we can take journeys off the public transport network.”

London’s population is growing by 10,000 per week and Gilligan told road.cc the only way to move everyone around is to increase cycling capacity on the roads.

He said: “If the transport system’s going to be able to cope at all, we have to do this, it’s not an option, it’s not some luxury … it’s the only way to keep the whole place moving. There’s another way, which is to build more roads, which is physically impossible in London.”

Next week Transport for London (TfL) will consult on returning Vauxhall Cross to a two-way system for traffic, with the aim of improving safety for pedestrians and cyclists alongside massive redevelopment work in the area.

Leon Daniels, TfL's Managing Director of Surface Transport, said: "Vauxhall is an area which will see tremendous change in the next decade, with the Nine Elms development, the Northern line extension and our wider plans to transform the Vauxhall Gyratory to two-way traffic. This new dedicated route through the area is the product of many years hard work by our designers, engineers and contractors. I would also like to thank local people for having borne with us while the work has taken place. This new, direct route will make cycling through the area safer for all."