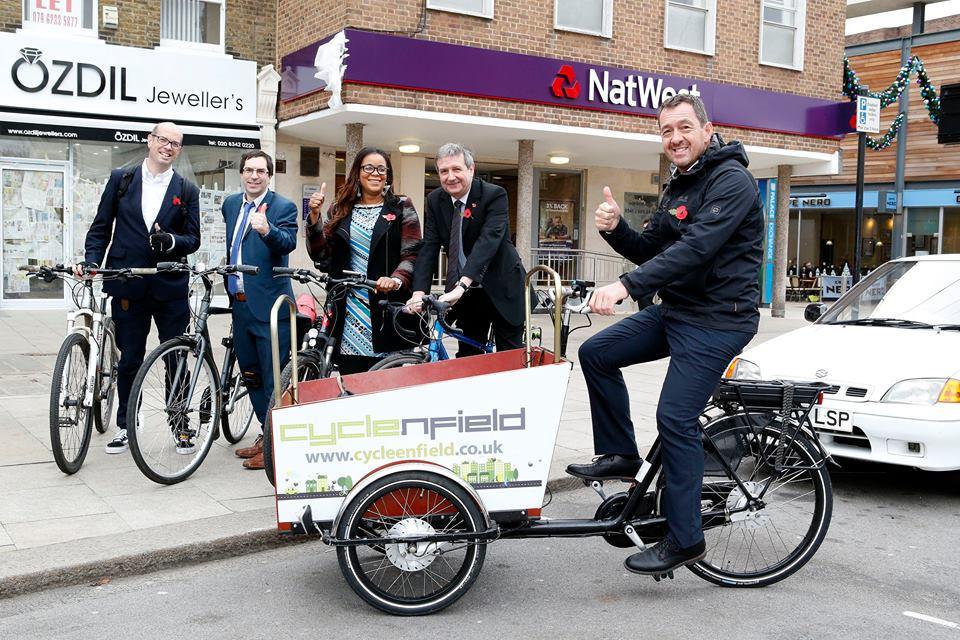 Meanwhile Andrew Gilligan says schemes should highlight benefits for all, not just cyclists
by Simon_MacMichael

British Cycling Policy Advisor Chris Boardman has visited Enfield to see its Mini Holland plans first-hand on a day that a member of the council’s cabinet said the response to consultation showed that the “silent majority” backed the borough’s proposals.

News of the Enfield decision comes days after a legal challenge to the Mini Holland scheme in the neighbouring borough of Waltham Forest was thrown out of court by a judge who also awarded Waltham Forest council costs of £12,000.

Meanwhile London’s Cycling Commissioner, Andrew Gilligan, says concentrating solely on the benefits to cyclists of Mini Holland schemes is wrong, since they improve local areas for everyone.

Enfield Council said today that most of the respondents to its consultation, which closed last month for the A105 at Palmers Green, were residents of the borough.

It added: “The majority of people who had their say lived directly on, or very near to, the proposed route.”

54 per cent of those supported the plans (45 per cent fully and a further 9 per cent in part) compared to 44 per cent who opposed them.

Among all respondents, 60 per cent were in favour (again, 9 per cent in part rather than fully) while opposition dropped to 39 per cent.

‘Safe pedestrian crossings’ (73 per cent), ‘improved air quality’ (56 per cent), ‘good access to shops and facilities’ (51 per cent) and ‘safe cycling provision’ (49 per cent) were the features rated as the highest priorities by respondents.

Critics of the proposals in Enfield, like those opposing a similar project in Waltham Forest, warn that removing parking spaces will affect local businesses.

But ‘convenient car parking’ was rated as a high priority by just 29 per cent of respondents, with only ‘places to sit on the high street’ coming lower at 22 per cent.

Councillor Daniel Anderson, the Council’s Cabinet Member for Environment, said: “The silent majority have spoken – and shown they actually like our plans, despite a vocal campaign which has been spreading disinformation about what the proposals would actually mean for Palmers Green.

“The funding we have received from the Mayor of London gives us a once in a lifetime opportunity to transform our town centres, boost business, revolutionise our transport links and transform our borough into one which meets the needs of residents, businesses and people travelling through it.

“We’ve always said we’d listen to people who got involved in the consultation and we have, and now residents recognise that this scheme is going to improve their quality of life and bring dramatic improvements to this part of the borough.

“Most people recognise that our Cycle Enfield scheme for Palmers Green and Winchmore Hill is good for residents, good for business, good for health and good for the borough and I am delighted that the people who took part in the consultation were so positive about the project,” he added

Mayor of London, Boris Johnson, commented: "It is very gratifying that the people of Enfield have spoken to back these plans to benefit the entire town.

“If this scheme did only benefit cyclists, it would not have been so widely supported. People in Palmers Green, the vast majority of them non-cyclists, understand that it will transform a traffic-dominated town centre into more attractive place for everyone: a place where people want to be, whether or not they are on a bike."

Writing in the London Evening Standard after it was confirmed that the public had backed the first phase of the Cycle Enfield Mini Holland, Mr Gilligan said people in foot had most to gain from such schemes.

“Pedestrians sometimes feel overlooked in the battle for media and political attention,” he explained. “But most of those who gain from the street closures, pavement widenings and new public spaces will actually be pedestrians.”

He pointed out that “too many politicians” forget that “in most of London, the majority, often the vast majority, of journeys are not made by car.

“In the centre, only about 10 per cent of journeys are by car or taxi. Ninety-three per cent of Londoners, according to a YouGov poll, seldom or never drive in central London.”

Car use is higher in outer London boroughs, but even then is not the mode of transport favoured by the majority.

He noted that in Enfield, “52 per cent of trips to the town centre are already made by public transport, cycling or walking.” And in Walthamstow – where another Mini Holland scheme is being rolled out – “it is about 75 per cent.”He added: “Quite often, our opponents accuse us of not listening. We should, and we will, always listen to objections to make sure we get the details right.

“But we – and our opponents – must also listen to the majority who say these plans are a good thing and want them to happen.”

Enfield Council, which is continuing to consult on other aspects of the Mini Holland project, said: “We are listening and the feedback we have received will help to shape the design of the final scheme.

“These changes will be shared in the concluding report.

“The report will include key information, such as economic and air quality assessments and comments received outside of the formal consultation process,” it added.