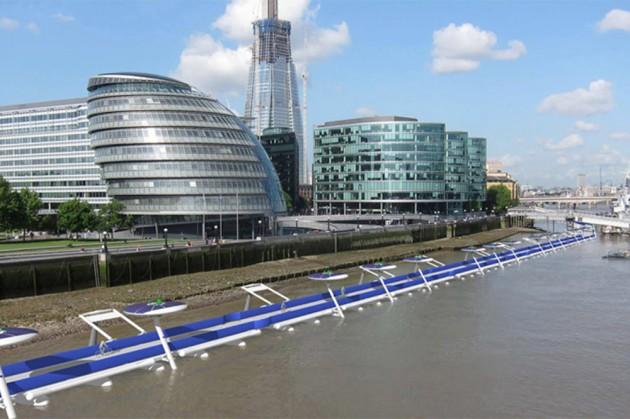 Would you use a floating bicycle toll road along the Thames?

Thames Deckway inventors will start crowd funding the idea this week - it's likely to cost more than £600m though...
by Laura Laker

Remember seeing this floating bicycle toll road along the Thames last year? Thought it was consigned to the 'seemed like a good idea at the time' pile? Well, you were wrong. Someone still thinks it's a good idea and, yes, they're crowd funding it.

Plans for the Thames Deckway appear the same as they were last October, when the projected cost was a whopping £600m for a 12km route from Battersea to Canary Wharf. Now its inventors want it to stretch from Battersea to Greenwich instead, a distance of around 17km (11 miles).

If built the floating pontoon on the Thames' south bank will, for a section, run parallel with the East-West cycle superhighway, which is currently being built on the river's north side, whose entire 18 mile length is expected to cost just £47m. The original proposal was to charge £1.50 for a single Deckway journey.

Anna Hill, a co-inventor of the project, said the Thames is a resource that is currently being under used, and the Deckway, which would also generate energy through solar cells, could be ready as early as 2019.

"With the success of this campaign we're ready to go. We're now so close to making this happen; we have the engineers, we have the designs and we have a plan," she said.

Counting down... join us for our crowdfunding campaign on 5th November!

Inventors hope the Indiegogo campaign, which opens on 5 November, will raise £250,000 to develop a master plan, develop engineering further, and try to find out how many cyclists will use it.

Peter Murray, Chairman of New London Architecture, said: "The Thames Deckway is inspirational because the Thames has been London's lifeline throughout history. If you look at images of 14th, 15th, 16th, 17th Century the river was buzzing with activity...today it's pretty dead by comparison, really, so why don't we use it for cycling?"

What do you think? Would you use a cycle toll road along the river? Is it worth £600m?

1
Journalist admits anti-cycle lane angle on London being named world's most congested city would “get more readers”
2
Cyclist fined £75 for riding outside London tube station – but park your bike there and it could set you back £50,000
3
Highway Code changes aimed at protecting cyclists to become law next month
4
Win! Hammerhead Karoo 2 cycling computer plus custom colour kit, HRM and bottle worth over £450!
5
Near Miss of the Day 673: “Way too close to ignore” – impatient driver brushes past cyclist
6
A lot of motorists really aren’t happy about impending changes to The Highway Code
7
Twin brothers in court charged with murder of charity cyclist in Scotland
8
Owner of van with spiked wing mirror claims it is to deter vandals, not harm cyclists