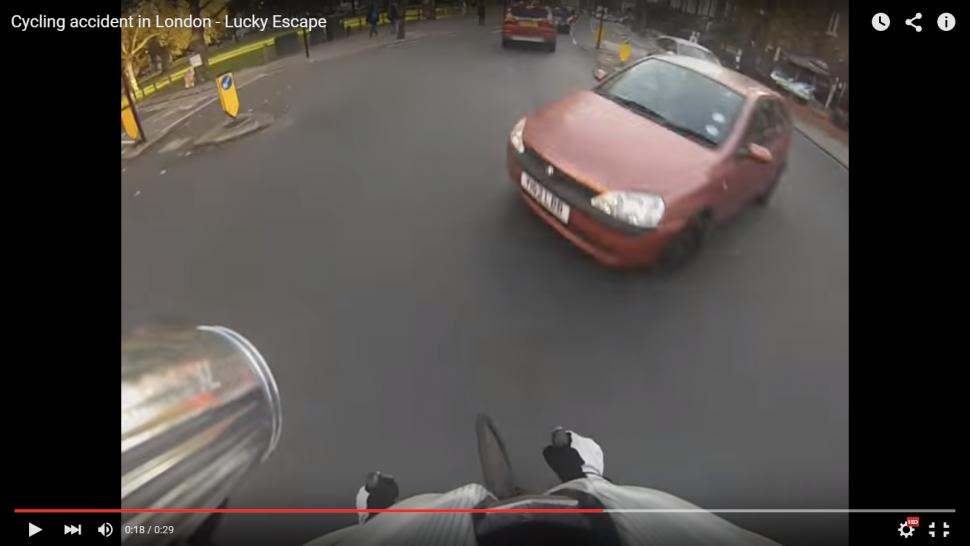 Video: you'll never guess what happens after this cyclist tries to avoid the pedestrians

A cyclist's helmet camera has captured the moment a driver cuts across his path at a junction in Fulham, leaving him with a fractured wrist and bruising.

The video, titled Cycling Accident in London - Lucky Escape, shows some of the challenges of cycling in the UK: Myles Gatherer is riding toward a  T-junction in a bike lane, before moving out to avoid two people crossing the road, while at the same time a driver, coming from the opposite direction, is turning right.

Video: Ninja skills cyclist lands on feet in miracle escape after being hit by car that cuts across him

The driver proceeds into Gatherer's path, and the moment of impact and cries of pain are captured as he hits the car, rolls across the bonnet and onto the ground.

Myles Gatherer told the Evening Standard: "When approaching the green lights two pedestrians crossed in front of me.

"When I entered the junction it became clear that a vehicle located at the oncoming side of the road intended to move across my trajectory."

Gatherer was not seriously hurt, fortunately.

Some viewers have expressed the opinion the rider should have slowed down for the pedestrians.

YouTube commenter 95Gabe said: "If he had braked when he saw them...like a motorist would...he would have been going slow enough to avoid the collision. I am not absolving the motorist, but I suspect the cyclist was hidden behind the pedestrians which were crossing the road. Given that they were there the motorist probably thought it was safe to turn."