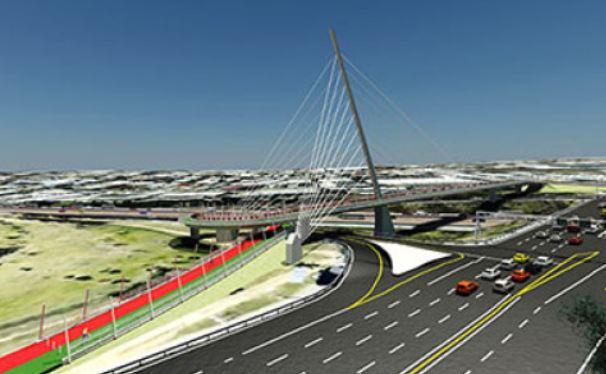 Structure at location of planned new bridge is on route used by 10,000 people on foot and bike each day
by Simon_MacMichael

A temporary bridge for cyclists and pedestrians across one of the busiest highways in Africa has collapsed in Johannesburg, South Africa, this afternoon, killing two people and injuring more than 20.

Scaffolding supporting the bridge, where construction began earlier this year, is thought to have been made unstable by gusts of wind causing it to crash onto the M1 highway beneath and on vehicles being driven on it.

On its Twitter feed, the City of Johannesburg said: “Engineers suspect that a gust of wind in the area led to the accident.”

It subsequently stressed that other potential causes are being explored and added: “The scaffolding fell on the front part of a minibus taxi while a private vehicle was completely covered by the scaffolding.”

There is no news as yet of cyclists or pedestrians being among the casualties.

Construction began earlier this year on a new R130 million (£6 million) bridge to serve the 10,000 people who walk or cycle the 5 kilometres and back each day from the Alexandra township to Sandton’s Central Business District in what is known locally as “the Great Walk.”

When the project, due for completion next year, was first announced, mayoral committee member for transport, Christine Walters, said: “Our objective is to create better connections between different modes of public transport – buses, trains and taxis – and to vigorously promote the concepts of walking and cycling through the provision of safe and accommodating infrastructure for all Joburgers.”

The city is currently hosting the EcoMobility World Festival which runs throughout October and which last week included a ‘Freedom Ride’ in memory of Nelson Mandela in which 4,000 cyclists took part and a Road Safety Family Day in Sandton, which saw a festival atmosphere as its main road was closed to traffic.