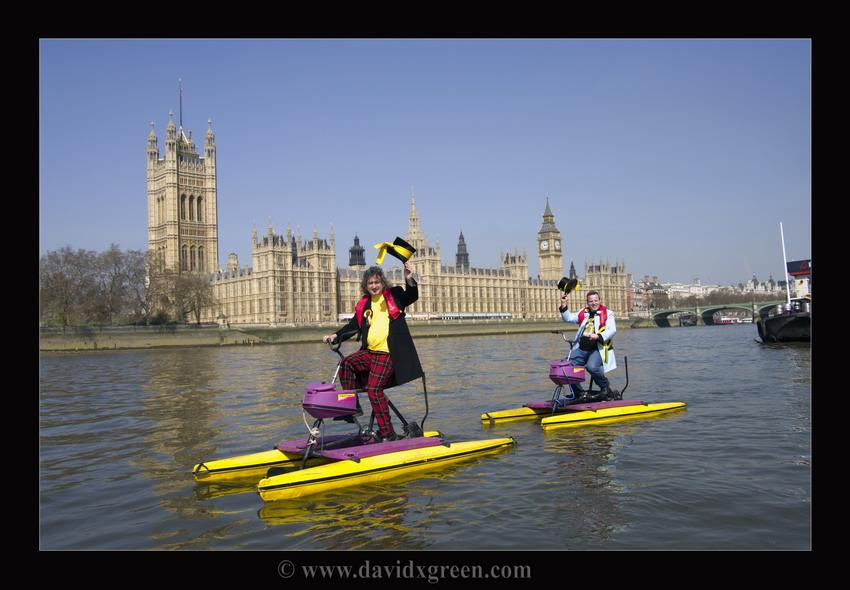 According to the BBC, Mr Knapp, who calls himself the Shadow Minister for Big Fibs and Blatant Lies, launched his campaign quite literally in London near Parliament at the weekend with numerous manifesto pledges among them the planned floating bicycles.

As our pictures suggest though these look worryingly sensible (from a Loony point of view) and extremely good fun.

"What with global warming everyone might have to use them when the sea levels rise," explained Mr Knapp.

"In the meantime we might have to build a few more canals and that can only be good for the unemployment figures," he added.

Well you can't argue with that and we'd like a water bicycle… all they need now is to add in bicycle monorails for those towns & cities without canals or indeed with them and they'd pretty much have the road.cc vote locked down in these parts at least.

Coming in the same day that road.cc reported a certain amount of dissatisfaction with the new Cycle Superhighways in London, perhaps Mr Knapp's plan isn't so loony? Certainly the party will be unhappy that when it comes to cycling it has had its loony thunder stolen by UKIP.

1
Warning to retailers after two bike shops targeted by turbo trainer thieves this week (+ video)
2
Near Miss of the Day 361: "Why go in front of me?"
3
Ere Research launch new disc brake wheels that “are close to the ideal aerodynamic shape” when used with its tyres
4
Near Miss of the Day 358: Close pass while cycling with kids
5
Near Miss of the Day 359: Cyclist uses bus CCTV to get taxi driver prosecuted
6
Eroica founder discussing launch of pro gravel race series with UCI
7
Doctor thrown off train because he hadn't reserved space for bike - even though there were four available
8
"Alarming" rise in doping cases in cycling last year