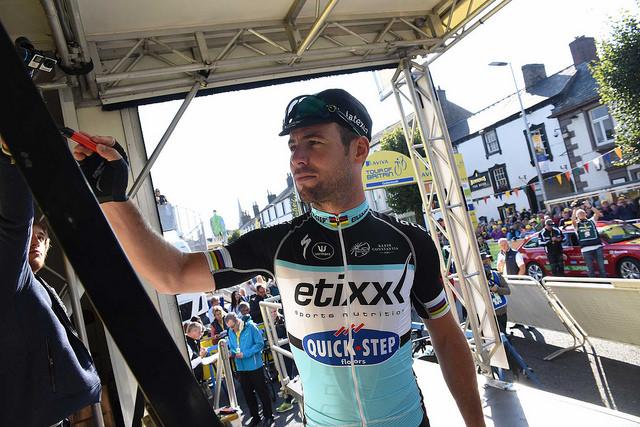 Mark Cavendish has today been confirmed as joining MTN-Qhubeka for the 2016 season, when the South Africa-registered team will race as Team Dimension Data following a change of sponsor.

Moving with the fomer world champion from Etixx-Quick Step is his leadout man, Mark Renshaw, while the pair will be reunited with former HTC-Highroad team mate Bernie Eisel, who moves from Sky, which he joined with his close friendCavendish in 2012.

Cavendish joins the UCI Professional Continental outfit on a three-year contract following what have at times been a difficult three seasons with Etixx-Quick Step.

Following initial success in 2013 with five stage wins at the Giro d’Italia, where he also became just the fifth man to win the points jersey at all three Grand Tours, he won two stages of that year’s Tour de France, his lowest return since his debut in the race in 2007.

His 2014 season ended early after he crashed on the opening day of the Tour de France in Harrogate, and in this season’s edition of the race he claimed just one stage.

Then, injury again cut his season short, this time after hitting a parked car during the Aviva Tour of Britain earlier this month.

His ambitions to ride the Omnium at Rio next year as he searches for the Olympic medal that has so far eluded him has also brought him into conflict with team manager Patrick Lefevere, who has made it clear that Cavendish is paid to ride on the road, not the track.

That's all water under the bridge now though, with Cavendish tweeting: "I've had three unforgettable years with Etixx-Quick Step. It's been an incredible experience racing for Pat Lefevere. Thank you for everything," to which Lefevere replied, "For me it was an honour and pleasure."

Speaking about his move, Cavendish said: “I’m super excited about becoming a part of the team for 2016. It is a team that I have watched closely as it has grown, especially over this season and been really impressed with the spirit, strength and dynamics of the group.”

Among the high points of MTN-Qhubeka’s season were Daniel Teklehaimanot becoming the first of its riders to wear a Grand Tour jersey when he led the mountains classification during the Tour de France, and Britain’s Steve Cummings taking a stage victory during the same race, his victory coinciding with Nelson Mandela Day.

“It’s fair to say that most of the peloton has seen how incredible the team raced this year,” Cavendish reflected.

“To join it with the target of helping to win even more races with other strong, experienced household cycling names like Mark Renshaw, Edvald Boasson-Hagen, Tyler Farrar, Daniel Teklehaimanot, Steve Cummings and of course Bernie Eisel is going to be real special, as well as assisting the talent of the young, African riders to top level success.”

Through its partnership with the charity Qhubeka, which among other things provides bicycles to children and adults in Africa to help make a difference to their lives, the team is also committed to help improve the lives of others.

That has a strong appeal to Cavendish, who is a long-standing ambassador of the charity Right to Play and who travelled to Africa in 2012 to see that charity’s work for himself, an experience that left him moved.

He said that one of the “biggest incentives” to join his new team “is riding for a greater cause in the Qhubeka charity. I’m really looking forward to having a successful year on the road alongside the other guys and helping directly to get more bikes in the hands of people who need them.”
Team owner Douglas rider, who said at the end of July that the team was unlikely to apply for UCI WorldTour status for 2016, although that remains the longer-term goal, said: “Mark Cavendish joining our team is a huge step forward for the team as we strive to get to the next level in world cycling.

“To also integrate Mark Renshaw and Bernie Eisel is a game changer in terms of performance and experience, which, added to the incredible talent we already have in the team opens up many possibilities for us.

“We have seen how success has brought fantastic new partners to our team in Dimension Data and Deloitte and the impact that it has had on our current bike partners like Cervelo.

“It is even more meaningful to tie that all together to achieve bigger impact for Qhubeka, the charity we ride for. Qhubeka, provides bicycles for African schoolchildren, enabling them to conquer distance every day to get to and from school.

“As the team’s visibility and success has increased, we are grateful for sponsors and individuals coming alongside to support our goal to provide 5,000 bicycles for African schoolchildren via the #BicyclesChangeLives campaign,” he added.

“We look forward to working closely with Mark and the other riders to accelerate the growth of the team’s contributions on and off the bike in 2016 and beyond.”

The team says it will announce further new signings shortly.