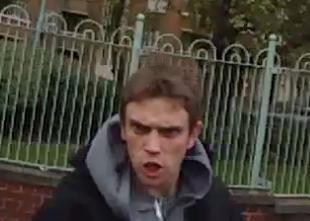 Man filmed pushing cyclist off bike hands himself into police

A man has handed himself in to a police station in east London after the Metropolitan Police published a video today showing a woman being pushed from her bike, with the film subsequently going viral.

The footage, which was recorded on the evening of 1 May by the cyclist involved, was shared widely through the cycling and mainstream press as well as on social media.

While it is unclear why it has taken nearly four months for the video to be made public, the speed with which the perpetrator – assuming it is him – turned himself in highlights the value of the internet in helping police progress investigations.

In a statement issued this evening, the Metropolitan Police said:

At around 13:30hrs on Tuesday, 25 August, a 33-year-old man attended Bethnal Green Police Station and identified himself as the man shown in a video released by the Met of an attack on a female cyclist in Whitechapel.

The man was not arrested. He will be interviewed by officers from Tower Hamlets in due course.

Earlier today, Paul Kitson, a solicitor for the law firm Slater & Gordon which counts CTC among its clients, said in a blog post on the national cyclists’ charity’s website: "Whilst the film clip is shocking this is unfortunately not an isolated incident.

“In my experience as a cycle injury lawyer I have come across examples of cyclists being deliberately pushed off their bikes by passengers from passing cars, motorists attempting to push a cyclist into oncoming traffic and even using their vehicle as a weapon.

"When a pedestrian deliberately pushes a cyclist off a bike this is a criminal act. The appropriate offence depends upon the extent of the injury."

The woman who was pushed off her bike in the incident which took place in Sidney Street, Tower Hamlets, did not need hospital treatment but was said by police to have been left very upset by it.

In the CTC blog post, Mr Kitson outlined the potential charges and sentencing that might apply in cases where cyclists are pushed off their bikes,

Given that the rider in this instance did not sustain serious injury, common assault, which carries a maximum sentence of six months’ imprisonment, seems the most likely charge should any be brought.