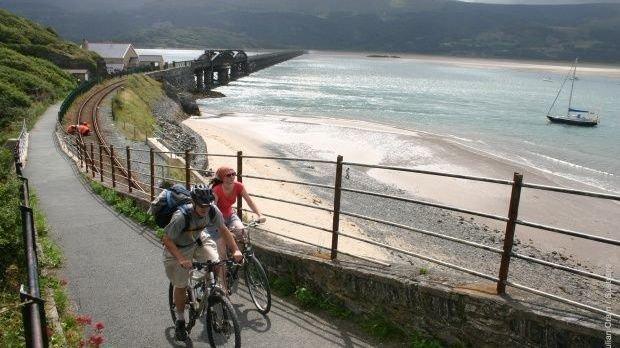 The Barmouth Bridge cycling and walking path closure would mean an 18 mile detour for 100,000 users each year, say petitioners
by Laura Laker

A petition to save a key Welsh walking and cycling route from closure has reached almost 20,000 signatures.

The petition, titled Keep Barmouth Bridge open to walkers and cyclists, is seeking to save a strategic link across the Mawddach Estuary, and on both the National Cycle Network and Wales Coast Path. Petitioners argue its closure would mean an 18 mile detour for its 100,000 users per year, on busy, narrow A roads, as well as negative effects on the local economy.

Gwynedd Council currently pays £30,000 per year for the path's upkeep to Network Rail, as it is part of a rail bridge. This is one of hundreds of services being considered by the council in a raft of savings to be made in the face of government cuts.

Glyn Evans, Sustrans Mid Wales Area Manager, said: "If the bridge closes there would be an 18 mile detour for the 100,000 users per year on the bridge. In terms of the National Cycle Network and Wales Coast Path but in terms of Barmouth and Fairbourne it would be a very negative decision and have a much wider impact on the local economy, as well as the lost health benefits."

"All those people spending money there, staying there overnight, it would affect the local economy more than just that £30,000."

The petition describes the route as "a key transport link enabling local people and visitors to travel actively and sustainably on a safe and beautiful path".

Evans says a manned toll booth used to collect 50p from passing cyclists but this was closed a couple of years ago as there were not sufficient funds to bring the building up to modern standards. He hopes Gwynedd Council and Network Rail can come to some agreement but if that fails, he said, the Welsh Government may have to assist.

He said: "As part of the Active Travel Act the Welsh Government have to map and continually develop a walking and cycling network. Closing off a route that has a 100,000 users per year is a completely backwards step."

"We really hope that local people who have supported the petition are able to support the Gwynedd Council consultation [on services facing cuts and closure] when it opens in early September."

A Network Rail spokesperson told road.cc it is in talks with Gwynedd Council and is considering whether the annual maintenance fee could be reduced.

The spokesperson said: “An annual payment from Gwynedd Council contributes to the maintenance and inspection of the iconic Barmouth viaduct and means we can ensure the walking route is safe to remain open for the local community and tourists. This is a long-standing agreement, dating back decades, and we understand the council previously collected tolls to help cover this cost.

“We are discussing with Gwynedd Council our proposals to refurbish the bridge, which was built in 1867, and secure its long-term future, so that it can continue to play a crucial role for the local economy.

“We are still in the very early stages of planning this project and we are looking at whether we can reduce the amount of maintenance required on the bridge, which could reduce Gwynedd’s liability in the future.”