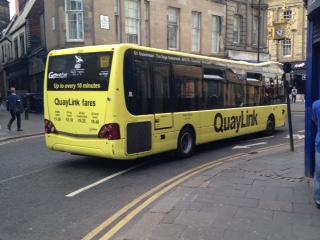 Campaigners say when they asked for contraflow bike lanes, they didn't mean ones like this...
by Laura Laker

Newcastle City Council has once again come under fire from local campaigners by painting a contraflow cycle lane on a one-way street that appears to pit cyclists head-on with buses.

The advisory cycle lane, on Clayton Street, was installed last month, a year after the campaign group, Newcycling, called for contraflow cycle lanes on one-way streets to make it easier for cyclists to get around. However, photographs of the road show buses cutting the corner and driving in the cycle lane, which has raised safety concerns over its design.

Newcycling says it is increasingly frustrated about what it says is a lack of infrastructure on the ground since the city received £6m in 2013 for cycling from central government, as well as criticising the quality of routes like this one.

Katja Leyendecker, of Newcycling, said: "It was a shame to see it designed so badly. People will walk past and immediately think: 'What a waste of paint and money'. Just imagine what anyone would think seeing the wheels of a bus driven straight through it! When, really, in a city that says it’s got cycling ambition, people should walk past and be able to say: 'This is wonderful, this makes sense, can’t wait – I want to use this too!'"

Leyendecker says she supports contraflow bike lanes because although beneficial in helping restrict motor traffic, the city's numerous one-way streets, which Newcycling has mapped, can also make cycling journeys longer and more complicated. Clayton Street was identified as a key barrier to cycling in the city centre where most of the city's one-way streets are located. She would like to see the council following Brighton's example of contraflow bike lanes on one-way streets.

“Clearly we have some way to go in Newcastle. In the meantime we urge the council to build adequate things adequately, including during construction.

“The devil is often in the detail" she said. 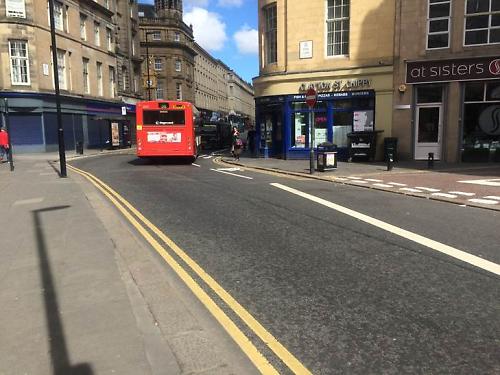 Leyendecker, who congratulated the council on their planned 20mph scheme, voiced frustration over the rest of the Cycle City Ambition Fund plans, both in terms of the time taken to deliver infrastructure and the standard of work, and urged the council to work with the campaign group to improve standards.

She said: “Our insistence on cycle contraflows is just to show that even the ancillary, easy and inexpensive stuff the council hasn’t managed to do to date."