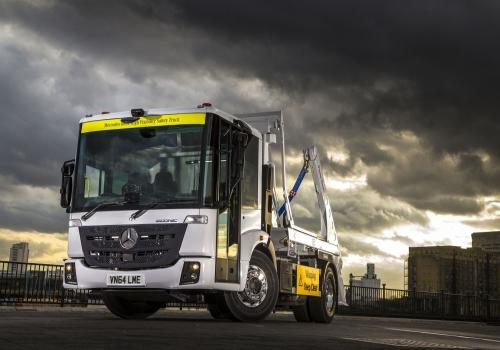 FTA says companies would buy safer lorries if they were more "commercially viable"...
by Laura Laker

The Freight Transport Association has agreed government needs to incentivise the use of safer lorry design, following David Cameron's announcement last week he would ask the Transport Secretary to look at improving HGV safety.

In response to the PM's meeting with the All Party Parliamentary Cycling Group (APPCG) last week during which Cameron said he would ask the Transport Secretary to look into measures to improve cyclist safety, including possible HGV bans in city centres, Christopher Snelling, Head of Urban Logistics at trade association, the FTA, said government should provide incentives for companies to use safer lorries.

This is in agreement with campaigners who have said safer lorries should be a contractual requirement for all companies working on government contracts like HS2. However, Snelling disagreed with the concept of a city centre lorry ban.

Snelling said: “Even a medium-sized lorry would have to be replaced with 10 vans – which means overall safety would not be improved, let alone the emissions and congestion consequences. It has to be remembered that we don’t choose to deliver at peak times on a whim – our customers need goods at the start of the working day.”

Snelling said he has written to the PM about cycle safety and "is having ongoing discussions with the Transport Secretary and Department for Transport officials over the best ways to improve safety for all road users while preserving efficiency."

Snelling's suggestions are: increased, targeted enforcement of rogue HGV operators, "improved road infrastructure, such as surfaces and junctions", increased compliance of the Construction Safety and Cyclist Safety Standard (CLOS), and incentives from government to make lorries with better visibility "more available and more commercially viable", as well as what he describes as progressive improvement of safety standards from the DfT.

However Snelling claims lorry safety has improved, despite the overwhelming majority of cyclists in London being killed by lorries.

The CTC's Sam Jones told road.cc: "Whether it's HS2 or the redesign of the A303, or any big public funded project, the government should be looking to ensure that the Heavy Goods Vehicles used are cycle safe, and making that into its bid process." That, he said, would "make companies spend the money on new fleets, because if they want the contract they have got to make sure they have got the right vehicles".

"If central government is doing that it is only a matter of time before local government does that too," he said.

Cameron agreed to meet with the All Party Parliamentary Cycling Group following concerns raised by Exeter MP Ben Bradshaw during PMQs after the death of 26-year-old Oxbridge graduate, Ying Tao, at Bank junction in London.

The PM agreed to open channels for a more in-depth meeting with Transport Secretary, Patrick McLoughlin, to discuss some form of lorry ban, and improved designs for construction vehicles and better enforcement of lorry safety regulations.