Reading Council to remove door zone bike lanes at a cost of £30,000

Two cycle lanes in Reading branded 'dangerous' and worse than no cycle lanes are being removed at a cost of £30,000 to the council.

The cycle lanes, on Lower Henley Road and Wokingham Road, were paid for by Local Sustainable Transport Fund money, but were placed directly alongside parking bays with no buffer zone so when a car door opens it obstructs the whole bike lane. Councillors voted to remove the lanes at a Traffic Management Sub-Committee meeting on Wednesday following complaints and an appeal by Reading Cycle Campaign.

Reading Cycle Campaign has called the u-turn a momentous landmark in its long history, and a hopeful sign the council will design better infrastructure in future. However, it questions why the cycle lanes were lacking the buffer zone it says the council had agreed to include.

Adrian Lawson, Reading Cycle Campaign, said: "This is only a partial success story because as far as we know they are going to remove the cycle lanes and leave the cycle symbols on the road, which from the point of view of an experienced cyclist is probably better but it's not going to help people who are currently not confident cycling in traffic."

Looks like the dangerous Wokingham road and Lower Henley road cycle lanes will be removed. Better no cycle lanes than...

Reading Borough Council has told people to check their mirrors before opening car doors onto the bike lanes, but as Lawson points out, the curve of the Lower Henley Road bike lane (pictured below) puts riders in parked vehicles' blind spots. Lawson says early plans for Wokingham Road, without the buffer zone, were met with 'unanimous condemnation' from campaigners, and the plans were changed to introduce the buffer. However Lawson said when the lanes appeared the buffer had gone. Lawson said on Lower Henley Road the paint seemed to go around whatever cars happened to be parked there at the time, including around informal parking bays with wide pavements he says could have been converted to car parking. Both the council's cycling strategy and government guidelines state cycle lanes should have a buffer zone of  0.5-1m to protect cyclists from car doors, but where that is not possible the central white line will be removed instead. 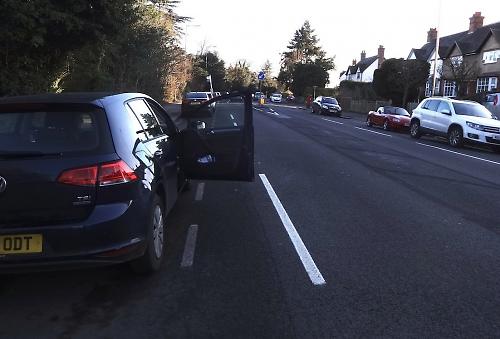 Lawson said: "There is a fundamental point here: the Department for Transport produces these guidelines and local authorities ignore them. What is the point of doing these guidelines when councils can do exactly what they like?"

However Lawson says there is a silver lining, and the fact of the u-turn may signal a change of heart in the council.

"That is actually momentous - in all the years of campaigning we have never got the council to overturn a bad decision until now so it is actually a very important milestone for us and we think it could be the beginning of something a lot better.

"The noise that we have made is now so loud that the council will listen to us; the noise comes when they design these half-baked cycle schemes."