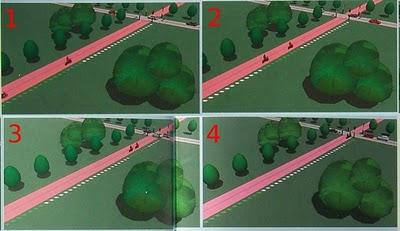 Video: Rotterdam to get green wave system to help cyclists beat the lights

Project builds on previous initiatives in Amsterdam and Denmark
by Simon_MacMichael

In a first for the city, municipal authorities in Rotterdam are set to implement a ‘green wave’ system for cyclists that will enable them to ride through a succession of traffic lights in the city’s Schieweg without worrying about the lights changing from green to red, assuming they ride at the correct speed.

Elsewhere in the Netherlands, Amsterdam already has a green wave system for bicycles in place, incorporating 11 sets of traffic lights on Raadhuisstraat, but that requires riders to maintain a constant speed of 18kph, whereas the proposed scheme in Rotterdam will incorporate pavement lights that will indicate the speed the cyclist needs to maintain to avoid being held up at the lights. Nevertheless, the Amsterdam system is pretty impressive in operation, as the following video shows.

Called Evergreen, the Rotterdam system has been designed by a Danish company, DTV Consultants, which took its inspiration from an existing project, the world’s first, in Odense, Denmark, which was designed to raise awareness of the potential of green wave technology for cyclists.

As shown in the video below of the system in operation in Odense, unlike Amsterdam’s green wave, the system includes roadside markers that turn green to indicate that they are riding at the correct speed to be able to ride through the next set of lights.
Based on an average speed of 15kph, obviously it’s not going to be much use to hardened roadies – although presumably you could come up with some complex formula to identify the optimal speed for hitting earlier phases of the lights – but it should prove a boon to those new to cycling, or who want to get from A to B without breaking into too much of a sweat.

In Rotterdam, green wave technology is set to be installed first at the junction of Schieweg and Bergselaan and should be in place by the summer, although it still needs to be formally approved by the municipal authorities.

It appears that unlike in Odense, the green LEDs will actually be embedded in the cycle path, starting 200 metres or so from the junction in question, and that will enable cyclists to determine whether or not they are traveling at the right speed to hit the lights on green.

Those riding inside the green LEDs will not have to stop, while the fron and rear LEDs will flash more slowly and quickly respectively, giving cyclists ahead of the wave the visual cue to slow down, and those behind and impetus to speed up.

One set of cyclists that won’t have to worry about Rotterdam’s red lights, however, will be those competing in this year’s Tour de France, which gets under way with an Individual Time Trial around the port city in July.

A programme of events designed to promote cycling is being held around the Tour’s Grand Départ, and it is hoped that the green wave scheme will benefit from the attendant publicity.