The new Focus Izalco Max Disc comes with the claim of being the world’s lightest production disc-equipped road bike, and with a SRAM Red-equipped model coming in at 6.8kg for a size 56cm, it nudges the Specialized S-Works Tarmac Disc I tested last year off the top spot. 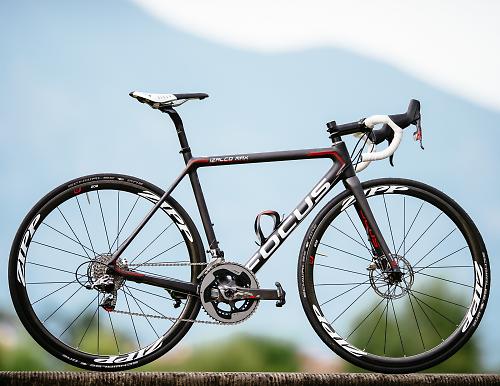 The benefits of disc brakes on road bikes is about “complete speed control” says Focus. It's clear, from speaking to Focus and the work that has gone into this new bike, that it really believes in disc brakes as a good thing on road bikes. And with the UCI ratifying disc brakes in the professional peloton, there's certainly an imperative now for manufacturers to develop race bikes with disc brakes if we're to see disc road bikes being raced.

Prior to my first ride, in the hills surrounding Lake Iseo in the Lombardy region of northern Italy, Focus revealed all the details of the new Izalco Max Disc, which you can read about in this first look article. In brief, Focus has built an all-new frame loosely based on the existing non-disc Izalco Max, with a frame weight of 790g combined with a new 325g fork. It incorporates the company’s novel RAT thru-axles, has 10mm longer chainstays and space for 28mm tyres.

Does the new bike deliver? Yes. It’s brilliant. While one day on the bike isn’t enough to provide a truly informed decision, I rode a variety of roads - long ascents, punchy climbs, sweeping descents, smooth and crackled road surfaces - that does help to provide a reasonably informed impression. 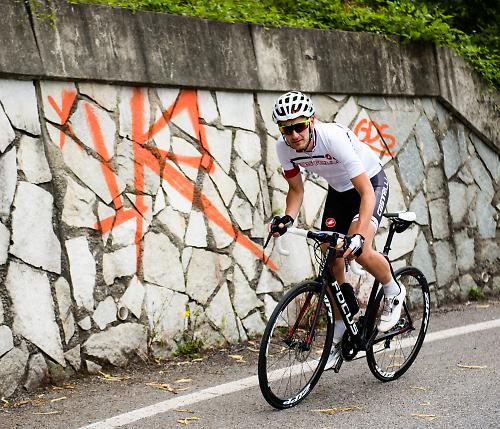 Putting disc brakes on road bikes is a controversial thing but it’s gradually gaining acceptance, but until now there has been a significant weight penalty. Focus has worked hard to minimise this weight increase with its new bike and the bike you see pictured, with a SRAM Red 22 hydraulic disc groupset, Zipp 202 wheels, Schwalbe One 25mm tyres, Fizik Antares saddle and Zipp alloy handlebars and stem, weighs 6.8kg (1499lb). That’s for a size 56cm without pedals. Focus also showed that it's possible to go sub-6kg or lighter if you throw some fancy lightweight carbon components at the frameset. 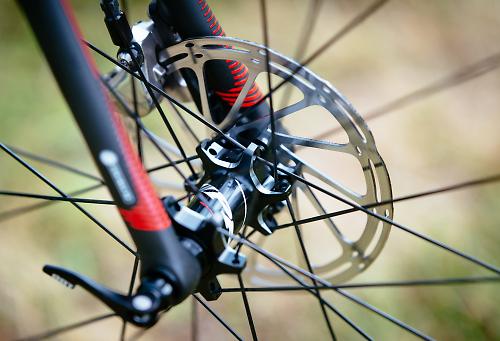 That low weight ensures the Izalco Max Disc devours climbs. We rode an 8.2km climb with an average gradient of 6% (the Polaveno da Iseo in case you’re wondering) and, fitness and extreme temperatures aside, the bike produced an impressive performance, as you would expect of a bike weighing in at the UCI’s minimum weight limit.

The frame and fork feels taut and stiff when pedalling hard. When pushing hard on the handlebars when climbing out of the saddle, I was unable to detect any front brake rub, something that has afflicted other disc-equipped bikes I’ve ridden in the past. Blindfolded, I would have been hard-pushed to discern any difference between this bike and a regular non-disc carbon race bike of the same weight. 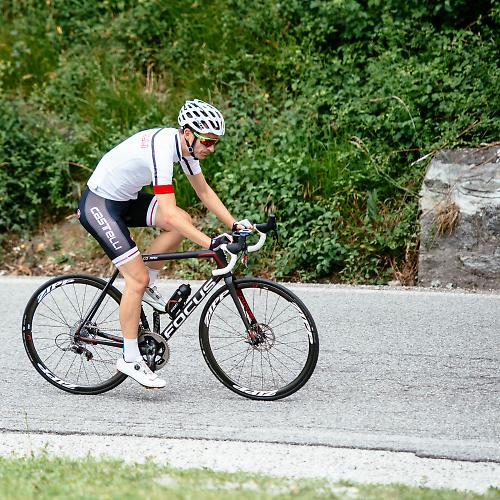 The steering is quick but doesn’t feel darty. Balance is extremely good, there’s enough weight on the front wheel to allow you to place the bike precisely where you want it through a high speed turn, and the fork copes really well when you encounter a patch of unexpected rough tarmac halfway through a corner. The ride is sufficiently compliant to provide a high level of traction and combined with the excellent Schwalbe One tyres in 25mm width, there is plenty of very usable grip. 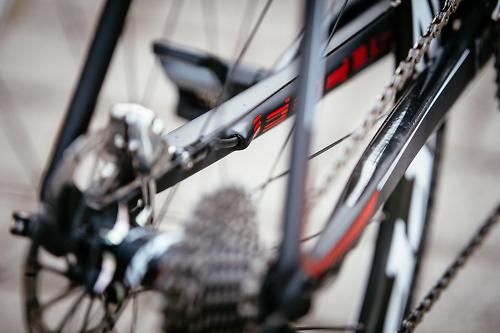 Focus has increased the wheelbase by 10mm, stretching out the chainstays from 405mm on the regular Izalco Max to 415mm on this new bike. That has the benefit of allowing extra space for bigger tyres, up to 28mm, but also gives the bike a wonderful stability at high speeds, with seemingly no loss of agility at lower speeds. I’d need to ride both bikes side-by-side to really be able to detect the differences, but the decision to lengthen the chainstays on what is a race bike doesn’t seem to have negatively impacted the handling. 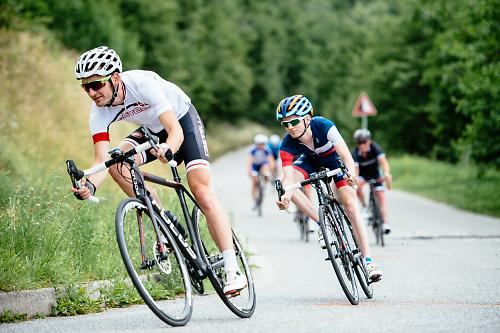 Impressive is how smooth Focus has managed to make the new bike. The roads in Italy can hardly be described as smooth, and cracks, ripples and potholes are regular occurrences. But the Izalco Max just seems to be able to take all those road blemishes in its stride. This comfort not only leaves you feeling fresher towards the end of a ride, but makes it a very calm bike to ride with none of the jarring sensation that can ruin the ride of some stiffer bikes.

Speaking to Focus reveals the new seatpost design, an answer to similar designs from Canyon and Specialized, is the biggest factor contributing to the seated ride comfort. Combined with the 25mm tyres, it’s a smooth ride, more than you might expect from a race bike. It’s very tolerant of bad road surfaces. Out of the saddle climbing and descending reveals it’s not all the seatpost though, there’s a good deal of compliance in the frame and fork that the comfort doesn't only occur when your buttocks are on the saddle. 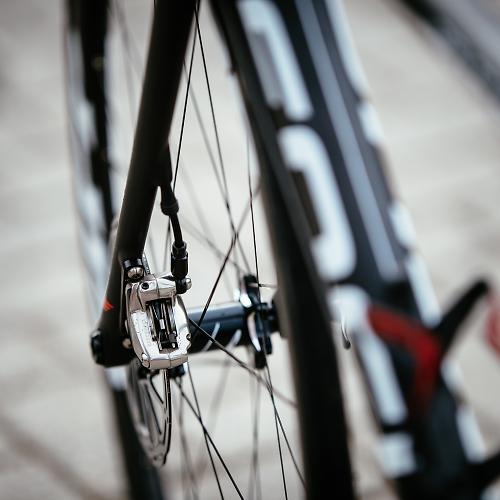 The SRAM hydraulic disc brakes don’t have the bite and grab that you would expect in a mountain bike hydraulic system, instead there’s a high level of smooth progression that makes the brakes very usable. The power ramps up  smoothly and gradually as you increase the lever pressure, and there’s no lack of stopping power when you approach steep hairpin turns with bags of speed. No matter how hard the brake levers are pulled, I never felt I was at risk of locking a wheel. 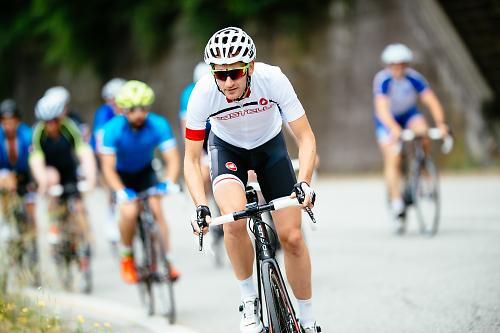 We reached some ridiculous speeds on some of the test roads. One long descent twisted and rolled down the mountain side, with steepest sections of 30% and littered with dips, crests, flat-out open turns, blind corners and even a type of corkscrew series of bends. It featured just about every sort of corner you can imagine. It’s the closest I’ve come to that sensation of being on a rollercoaster on a road bike, and was without doubt a brilliant test of a road bike. It’s the sort of road that is very quickly going to highlight any negatives or difficulties in the handling balance. 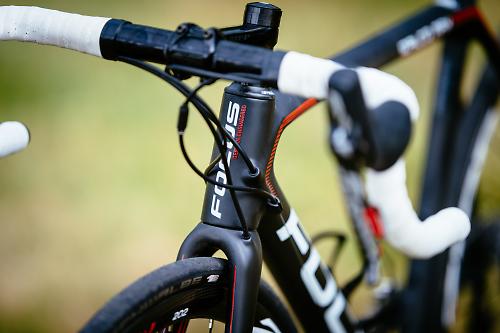 The Focus absolutely shone. The progressive modulation of the brakes made it easy to control the speed. The Izalco Max Disc frameset provided such a good amount of grip you could really lean hard on the tyres through the corner. The steering was neutral and stable at these higher speeds. The handling felt instinctive, and the balance and the compliant nature of the frame and fork made the Izalco Max Disc both extremely fast and easy to ride. 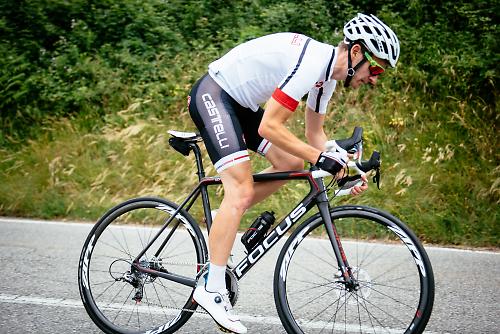 Disc brake road bikes take a step closer to rivalling traditional race bikes with the launch of the new Focus Izalco Max Disc. Here’s a bike that matches regular race bikes for weight and stiffness but bests them on comfort, smoothness and outright control. The Izalco Max Disc is intelligently designed and provides stunning performance. If this is the future of road bikes, we've all got nothing to worry about. 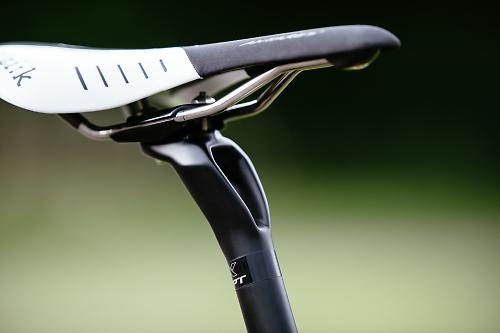 I’ll be getting a long-term test on this new bike hopefully in July/August so I’ll be able to log a lot more miles and put it through its paces on familiar roads.  The obvious rival is the Specialized S-Works Tarmac Disc I rode last year, and I would love to get both bikes side-by-side for a shootout.