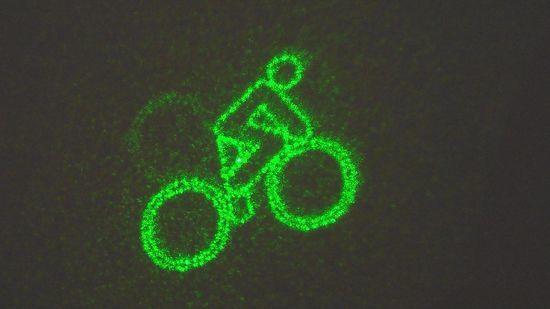 A small cycle technology business founded by a female entrepreneur is on target to make sales of more than £1m this year - despite its owner saying she never intended to start a business.

Emily Brooke, aged 29, came up with the idea of an LED light that projects an image of a bike onto the road in front of a cyclist to give them added visibility at night and avoid cars turning in front of them.

Emily was studying product design at the University of Brighton when she had the idea, and travelled to China to look into manufacturing.

Back in 2012 we reported on Emily’s Kickstarter campaign to raise the funds to go into production. The campaign quickly made £55,000, doubling the original fundraising target.

She went on to win the New Generation prize at the Veuve Clicquot Business Woman Awards 2015.

She told This Is Money: 'The first time I saw the product in China I was very emotional. I thought 'I can't get over-excited – I have to pretend to be a boss'. To hold it after the blood, sweat and tears was very special.'

She said of the fatal bike collision she heard about that inspired her design: 'It was a slap in the face for me. I thought 'this is exactly the product that can tackle this problem – why aren't you doing it?'.'

The £125 light is mainly sold in the UK through Blaze's website, but Brooke said: 'We have been shipping it abroad for the past year and are in 50 countries, including Vietnam last week.

'We are in every Evans Cycles and a few key retailers, such as the Design Store in New York. There will be new products in the autumn. I'm looking at Japan, the US and Germany this year.'