The Blaze is a new product that, as well as being an LED front light, projects a green symbol of a cyclist onto the Tarmac ahead of you to warn other road users of your presence. The team behind the product is currently looking for backers to take the design from the prototype stage to market.

The Blaze is the idea of Emily Brooke, a product designer who came up with the concept while studying at Brighton University.

"In my final year at Brighton I gave myself the theme of urban cycling," said Emily. "It was a question of cycling around Brighton and thinking about what would help. That chap over there can’t see me, but if I was four yards ahead he could see me, so I’ll project a presence four yards ahead. I was working on it all through my final year." 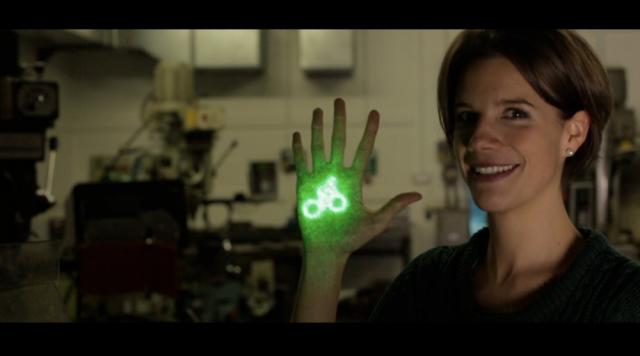 By shining the green symbol out in front of you, the Blaze is intended to stop you getting caught in a blindspot and to tackle the problem of vehicles turning across your path. Countless cyclists have experienced the scenario of a car pulling up alongside them but not fully overtaking, and then the car turning left – either directly into them or right in front. Out of sight, out of mind.

The Blaze is adjustable, the idea being that you project the symbol a few metres ahead of your bike. Then, even if a motorist can’t see you, they’ll be able to see the symbol on the road so they’ll know you’re there. In that way you are increasing your visual presence on the road. 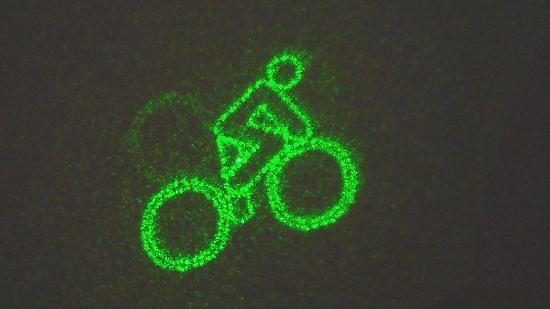 It’s also intended to stop motorists pulling out of junctions you’re just about to pass, and to warn pedestrians not to step off the kerb when you’re approaching.

We’ve reported on the Laser Light Lane in the past, which is a similar idea. It’s a rear light that shines the image of a bike lane, complete with cyclist symbol, onto the road behind you in low light conditions. 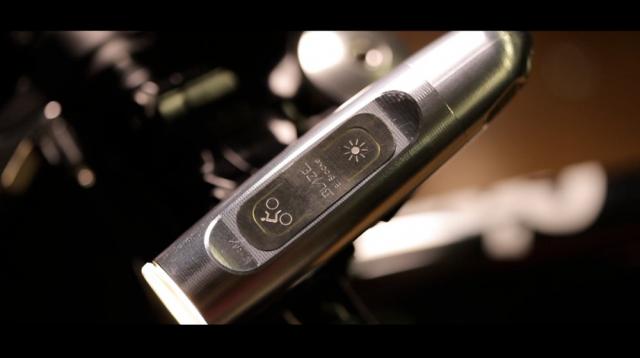 Although the finished product has yet to be made, the four-person Blaze Components team have created many working prototypes. The latest versions come in machined aluminium casings that are 110mm long and weigh less than 200g, and they’re waterproof. They use 1500mAh rechargeable lithium cells – although larger cells may be used on the final design. 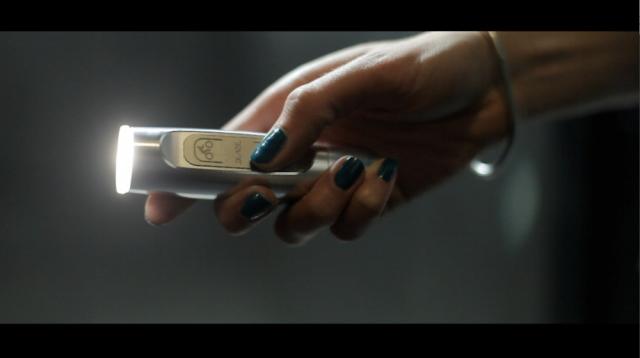 You can control the LED and the green laser independently and run them each in either flashing or constant mode. The current batteries will provide six hours of life for the LED light plus the laser module on constant mode. On flashing mode they give up to 12 hours. The LEDs on the prototype give over 80 lumens of light.

Right now Blaze Components are looking for backers to launch the light. The product is up on Kickstarter, which is a funding platform for creative projects: games, art, films, technology… They’re after £25,000 by 23 December and last time we checked they were about halfway there. Kickstarter funding is all or nothing – so if pledges fall short of the 25 grand, Blaze Components get nowt.

For more information on the Blaze, go to www.blazecomponents.com. If you want to pledge your support, head over to the Blaze Bike Light page on the Kickstarter website.