Subscribe
Back to news
news
Racing
Art and design 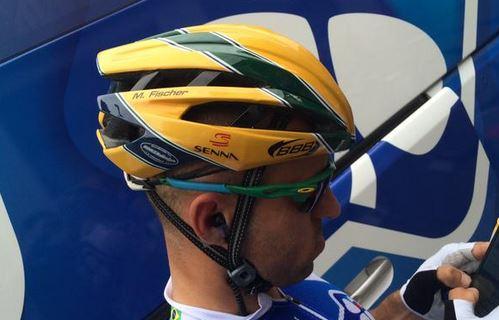 Brazilian cyclist Murilo Fischer has paid a very personal tribute to Ayrton Senna on today’s Giro d’Italia Stage 11, which finished at the Imola motor racing circuit where the Formula 1 driver was fatally injured in a crash during the 1994 San Marino Grand Prix.

The FDJ.fr rider’s helmet today was modelled on the same colour scheme – yellow, with green and blue band – as the helmet the three-time drivers’ world champion famously wore during his career, and carried the racing driver’s name as well as his ‘S’ logo.

Senna was pronounced dead on the evening of the crash, on 1 May 1994, at hospital in Bologna, where he had been taken after his Williams car exited the track at Imola’s Autodromo Enzo e Dino Ferrari and hit a wall at 145mph.

His death at the age of 34 provoked a huge outpouring of grief in Brazil, with an estimated 3 million people taking to the streets of San Paolo for his funeral.

Pictures of two-time Brazilian champion Fischer in the helmet at the start of today’s stage in Forli were tweeted by FDJ.fr trainer David Han.

Here’s a closer look at the helmet, made by team partner BBB Cycling, Tthe tweet below is from Belgian TV channel Sporza, followed by a picture of one of Senna’s versions from the Bell Helmets website. Fischer himself finished 98th on today’s stage, 19 minutes 5 seconds down on the stage winner, Ilnur Zakarin of Katusha.