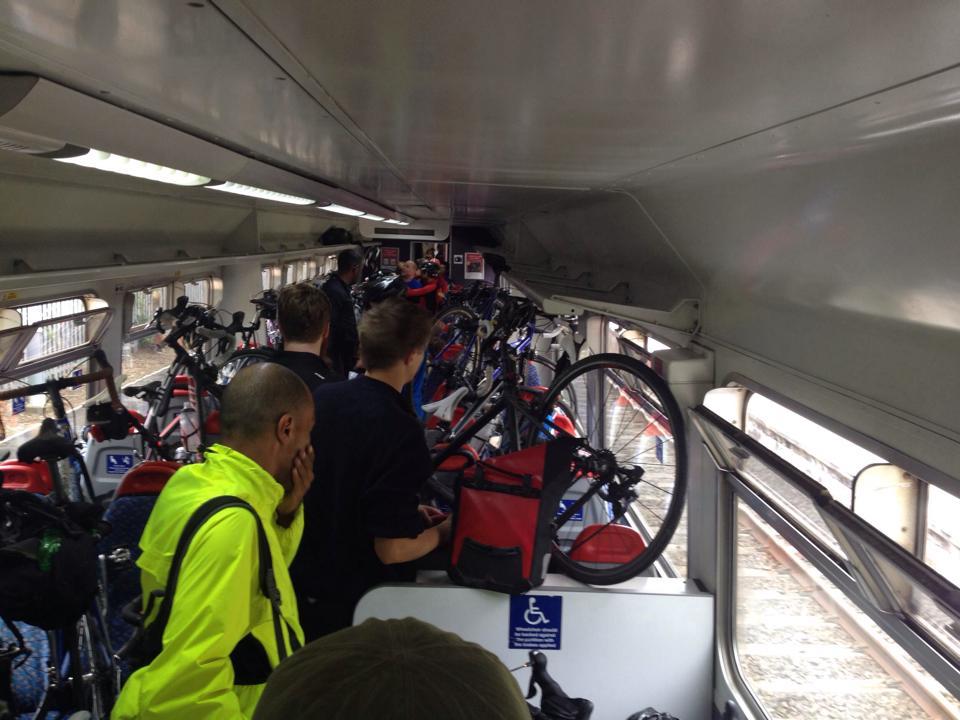 Dunwich Dynamo riders will have to find alternate ways to get home from the annual 120 mile overnight ride from London to the coast after train company Abellio Greater Anglia banned bikes from some of its trains and limited others to carry 50 bikes.

On its website the company says the changes are due to increased popularity of the event, which takes place on the night of Saturday 4 July/Sunday 5 July, and the pressures on its trains and inconvenience for fellow passengers.

Most Dunwich Dynamo riders and their bikes make it back to London on coaches organised by Southwark Cyclists - around 1,000 of the estimated 1,700 who attempted the unsupported ride last year.

But others who took the train posted photos of lage numbers of bikes piled on empty train seats with people standing in the aisles instead.

Participants in this year's July 4 'Dun Run' who don't get a place for themselves and their bikes on the pre-booked return coaches and lorries can book their bikes on the train via a special web page, but they will have to get to Ipswich, 30 miles South West of Dunwich, first.

That's not necessarily the first thing you want to do when you've just ridden well over 100 miles, especially one that has a symbolic end in the shape of the sea. What's more, you need printed proof of booking, otherwise you won't get on the train - so you need to make sure you get to Ipswich on time.

The company's website says: "Due to the growing popularity of the annual Dunwich Dynamo cycle event, and to maintain a punctual and safe service, Abellio Greater Anglia will this year introduce partial cycle restrictions on its network on Saturday 4th and Sunday 5th July." 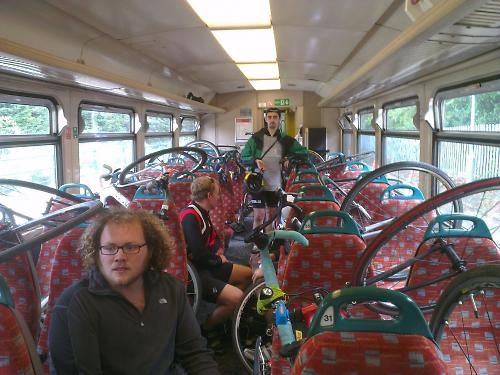 On the Sunday, up to 50 pre-booked bikes will be allowed on the Ipswich service, for which Abellio Greater Anglia is able to put in a special timetable and give a longer station stop to load the bikes. This won't be possible for riders going to London on Saturday, however.

Riders won't be able to take their bikes from Dunwich to Ipswich on the East Suffolk line on Sunday either.

Abellio Greater Anglia said: "Last year we carried several hundred bikes on trains which are not designed to carry many bikes. This made it uncomfortable for other customers and caused a number of problems including delaying services and inconveniencing other rail passengers".

On the intercity route from Ipswich 50 bikes will be stored in a part of the train where usually just six are allowed while from Norwich eight bikes will be permitted. The company is also doubling bike spaces to eight on its rural routes for Saturday 4 July only, for those taking trains to London to start the ride. Due to Crossrail work Abellio Greater Anglia said it is unable to run extra services.

The company said: "We are likely to be completely full for most of the day so we would recommend either travelling later or using one of the organised buses/lorries back to London.

"We expect most customers with bikes to board at Ipswich. You will not be permitted to board Intercity services with a bike without the appropriate reservation at any mainline station."

Last year riders praised the train company for squeezing so many bikes on, and while many understand the logistical limitations some are far from happy about the changes.

One said, after the announcement of changes to service: "Surely anyone with any business sense at all would see 'the growing popularity of the annual Dunwich Dynamo cycle event' as a huge opportunity, only to be capitalised upon by laying on more capacity for BIKES". #stupidityincharge 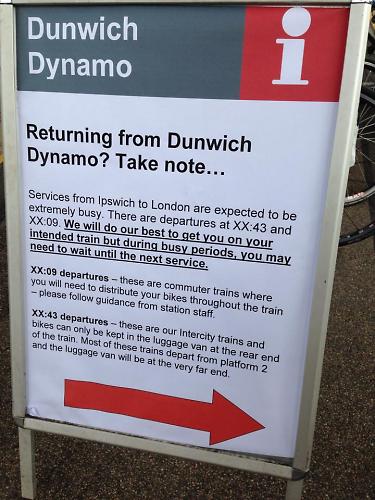 Another said, after last year's event: "Staff at Ipswich were also excellent and well briefed, we turned up long before our booked tickets and they took the sensible choice and got us loaded and gone before it got busier."

The Dun Run has become somewhat a bucket list event, started in 1993, reputedly by couriers who decided on a whim to ride to the coast one night. It's a turn up and go event with no official organiser, though Southwark Cyclists and others arrange return coaches and lorries for attendees and their bikes respectively, and enterprising locals set up feed stations along the route.

Return coach spaces are left, though limited in number, and can be booked, via Southwark Cyclists, here.

The restrictions for the Dunwich Dynamo, from Abellio Greater Anglia's website, are as follows:

Bikes will be prohibited on the following routes: Lowestoft - Ipswich, Lowestoft - Norwich.

Only 6 bikes can be carried between Norwich and Ipswich.

Intercity services starting from Ipswich travelling to Colchester/Chelmsford/Stratford/London will carry a maximum of 50 bikes per train only and must be reserved in advance - a free bike ticket will be generated and this must be presented before boarding.

Stopping services that start at Ipswich at XX:09 past the hour will be prohibited from carrying bikes.