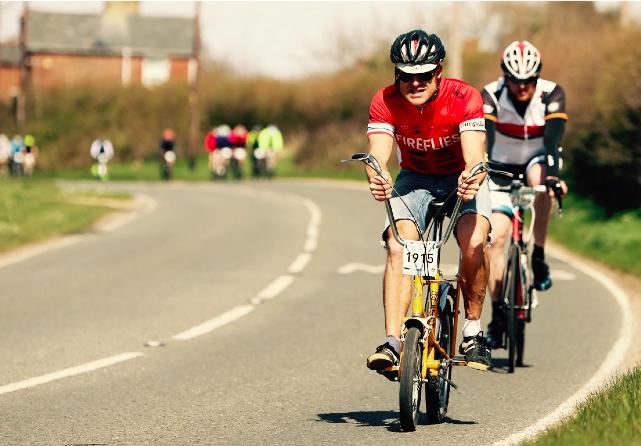 Matt's wardrobe, cycling equipment, diet and training methods are exclusively from the 1970s...
by Sarah Barth

Alex Dowsett broke it on 2 May, Sir Bradley Wiggins will attempt it on 7 June, Dame Sarah Storey just missed it on 28 February; the Hour Record, is now being eyed up by a British cyclist on an unmodified 1969 Mk1 Raleigh Chopper.

On 23 May a new Hour Record will be set by Matt Richardson to raise money for Leukaemia & Lymphoma Research. Matt, whose father died of cancer in 1999, will set a new world record at 2.00pm on Saturday 23 May 2015 at Palmer Park Stadium, in Reading, Berkshire.

Last year, the 48-year-old lawyer from Henley-on-Thames, made the news by riding an unmodified Raleigh Chopper to the summit of Mont Ventoux, one of the toughest Tour de France climbs. He conquered the mountain in 2 hours, 10 minutes, overtaking 41 road racing bikes. The ride raised over £5,000 for Ridley Scott Films’ Fireflies Tour.

Matt, whose wardrobe, cycling equipment, diet and training methods are exclusively from the 1970s said:
“After my Chopper assault on Mont Ventoux last May, people asked me ‘what next?’. Having raised so much in generous donations last year, I knew this year it would have to be something even more extraordinary… and absurd… and definitely in cut-off jeans and trainers riding a Chopper.”

“When I saw Jens Voigt set a new world Hour record in September 2014 I thought ‘that’s it: The Raleigh Chopper Hour Record.’”

He added: “My father was just 55 when he died. I have just one hour to inspire as many people as possible to donate, help to beat blood cancer and reduce the number of people that go through the pain and loss my family is still enduring.”