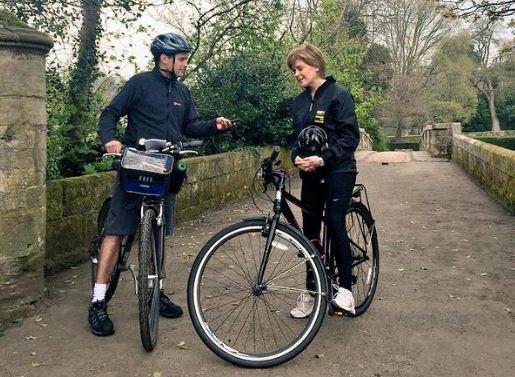 Nicola Sturgeon: SNP wants 10 per cent cycling share by 2020 – but campaigners already say “no way” that will be hit

Scotland's First Minister Nicola Sturgeon, who many believe will hold the balance of power in the UK after next week’s general election, says the Scottish National Party wants 10 per cent of journeys in Scotland to be made by bike by 2020 – though campaigners said just six months ago there was “no way” it would be met.

The target was originally announced in the Cycling Action Plan for Scotland (CAPS), first unveiled in 2010 and revised two years ago.

But last November, the country’s former transport minister, Keith Brown, said it was more of a “vision” than a target.

While progress has been made to grow the share of cycling for journeys in Scotland – notably, Edinburgh, Moray and Inverness are all around that 10 per cent mark at least for commuter trips – nationally, the picture is little changed.

Earlier this month, Keith Irving, chief executive of Cycling Scotland, said the target was “ambitious but achievable" although he added it would need "a step change in the amount of effort required to help achieve it."

Cycling campaigners are less optimistic, however. In November, campaign group Pedal on Parliament had told Holyrood’s infrastructure and capital investment committee that “there is certainly no way that the current rate of progress, nor that the current Cycling Action Plan for Scotland approach will achieve anything like the growth required.”

Like all leaders of the main parties, whether fielding candidates across the UK or just in Scotland, Wales or Northern Ireland, Ms Sturgeon had been asked by the #ChooseCycling network of British businesses to outline her party’s position.

Sturgeon, who became the country’s First Minister after Alex Salmond resigned in the wake of last September’s referendum which saw 55 per cent of those who voted wanting Scotland to remain in the United Kingdom, is not herself standing for election next week.

She explained that since “policy over transport, including cycling, is reserved to the Scottish Parliament,” which the SNP controls, “I will take this opportunity to highlight the SNP’s actions on cycling” – in other words, what it is doing at Holyrood, where the next election is due to take place in May next year.

She said: “The SNP Government is proud to be delivering the largest ever investment in cycling and walking in Scotland. We are investing almost £40 million in active travel and much of this investment is matched by partners – for example through the Community Links programme Sustrans generated some £25 million match funding [in] 2014/15.

“This funding will help support delivery of our ambition to see 10 per cent of all everyday journeys made by bicycle by 2020. The updated Cycling Action Plan for Scotland 2013 sets out what more needs to be done to enable progress towards this shared aspirational vision.”

She continued: “The Scottish Government are working with partners to make Scotland’s roads safer for pedestrians and cyclists.

Ms Sturgeon said, “We have developed guidance for local authorities on 20mph limits and zones,” which she insisted would give “greater clarity” to councils considering implementing lower speed limits.

“The Scottish Government will also continue to support the development of the National Cycle Network and its eventual completion in the years to come.”

She added: “We believe active travel should be part of everyday life from the earliest years. We now have 38 per cent of primary schools offering Bikeability Scotland on-road cycle training. This is up from 23 per cent just three years ago. This all achieved through Scottish Government funding, and Cycling Scotland.”

If the SNP is so committed to achieving that 10 per cent goal, however, and given it has a majority at Holyrood and transport is a devolved topic, some might wonder why it has not followed the lead of the Welsh Assembly Government which in 2013 brought in the Active Travel Act.

The legislation was described at the time by Sustrans Cymru as a “world first,” with the sustainable transport charity’s director for the country saying, “the passing of this legislation shows that Wales’s leadership is serious about making walking and cycling the normal choice for more of our everyday shorter journeys.”

Commenting on Sturgeon’s letter, British Cycling policy advisor Chris Boardman seemed unaware that the 10 per cent share by 2020 target had been set five years ago, or of campaigners’ concern halfway through the 10-year period that it wouldn’t be met.

He said in a press release: “It’s encouraging to see the SNP commit to our 10 per cent target of everyday trips being made by bicycle.

“Nicola Sturgeon cites funding that is already going towards cycling in Scotland but it would be even better to see an annual transport funding commitment towards cycling, as active travel, that is more in line with achieving the target of 10 per cent of journeys by bike.”

Last weekend, the SNP’s Derek Mackay, who succeeded Mr Brown as transport minister in the Scottish Government in November, told the fourth annual Pedal on Parliament ride: “I can assure you that I hear your message that every politician should do more for cycling.

“There's a long way to go but my assurance to you is that as the new minister for transport is that I will do everything I can to support cycling as much as I can.

“My commitment for 2015/16 is the government will spend more on cycling than the record breaking previous year.

“We'll put our money where our mouth is to invest in infrastructure so that cycling is seen as a proper mode of transport – across a range of policies.”

He added: “There's consensus across the political parties to invest in cycling, and at local level. I commend Edinburgh council for leading the way on 20mph limits and I will make it as easy as possible for other councils to follow suit."