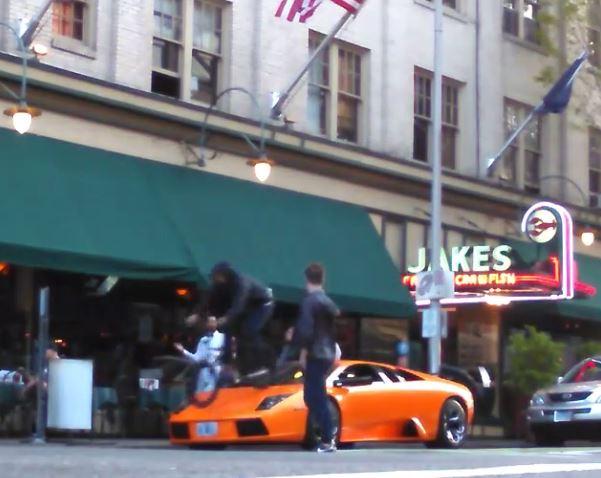 Riding over a Lamborghini (source Josh Navarro on Instagram)

Josh Navarro posts footage of himself jumping $350,000 supercar to Instagram
by Simon_MacMichael

The owner of a Lamborghini that a BMX rider rode over while it was parked outside a restaurant in Portland, Oregon, says he isn’t too bothered by the stunt – though he hopes the cyclist won’t repeat it.

Footage of Josh Navarro performing the trick last Saturday went viral after he posted it to his Instagram account, and it was picked up by news outlets worldwide.

It happened outside the Jake’s Famous Crawfish restaurant where the car’s owner, Kelly Howard, is a regular.

A video posted by Josh Navarro (@ajourneythroughtime) on

The sight of Navarro riding across the roof and bonnet of the $350,000 supercar elicited a rather comedic response from one of the restaurant’s waiters, Origene Petersen.

"He just takes off, hops over and rides all the way down, and anyone's natural reaction is like, ‘what the heck just happened,'" he told Fox 12.

But the car’s owner, who revealed there was no damage other than a tyre mark on the windscreen, was unfazed.

"I could care less. My Lamborghinis are my day cars. I like them,” he said.

But he added: "I'll drive my cars and he can go make his videos, but hopefully next time he'll drive around it and not on top of it.”