Plus prize winning bikes from: Donhou, Saffron, Hallet, Satoma, Longstaff, Moss and a massive gallery of much, much, more
by nick_rearden

The Bespoked show at Brunel’s Old Station in Bristol kicked off Friday with an initial public viewing and judges poised to award prizes for all bicycle categories plus a few more besides.

We showed you previews in part one and part two over the last few days, but there’s nothing like looking at the real thing once show-time comes and the exhibitors didn’t disappoint, delivering a better than ever selection of all-purpose road, pure racing and especially touring hand-made frames and complete bicycles at this fifth edition of the show. Here are the awards and just to give you an idea of the difficulty the eight judges chaired by author and TV presenter Rob Penn had in reaching agreement on some of the categories, the award presentation was made a full hour later than scheduled.

Best in Show - supported by Reynolds

Timmy Rowan, from Woodchurch in Kent and a new frame-building graduate of the Bicycle Academy in Somerset won the Best Newcomer and then the overall Best in Show with his cross between a do-it-all road bike and a traditional porteur.

Named not surprisingly ’Do-It-All’ and equipped with a cherrywood front basket hand made with copper rivets and enough glorious detail to turn the judge's heads, the bike seemed to whisper ‘winner’ right from the show throwing the doors open though few would have predicted it would win the top prize. 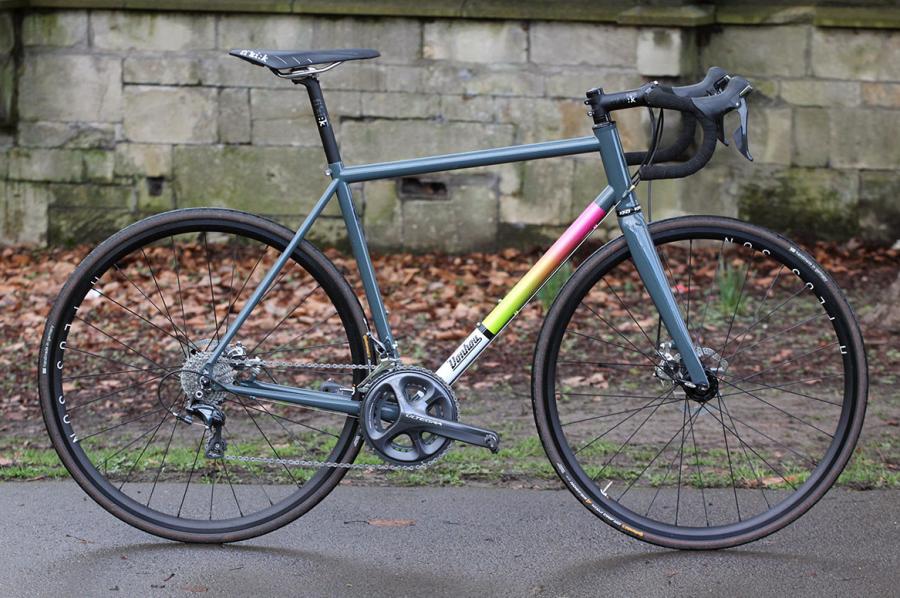 Tom Donhou, a previous winner at the very first Bespoked show five years ago but with a utility bike, won the road category this time and with his first foray into limited-production frames. His Reynolds 853 DSS1 is available in three sizes and takes either cable or electronic controls and cable or hydraulic disc brakes. We've got a test on this very bike in the works right now and but you can also find out more about (and see a lot more pics) in our recent Just In article on it.

Swarf Cycles carried away the off-road category with the Spline, one of two excellent hand-built steel 29ers on their stand. To be honest, whatever the judges thought, we were just as impressed with Swarf’s tiny one-off, hand-laid-up carbon fibre kid’s balance bike although we hate to think what it would cost. 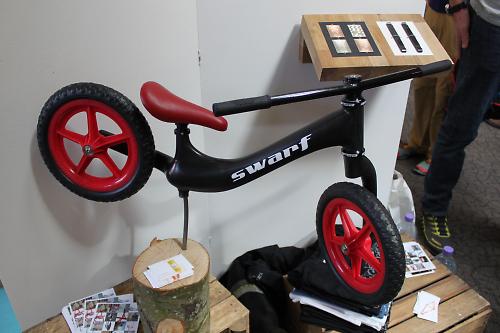 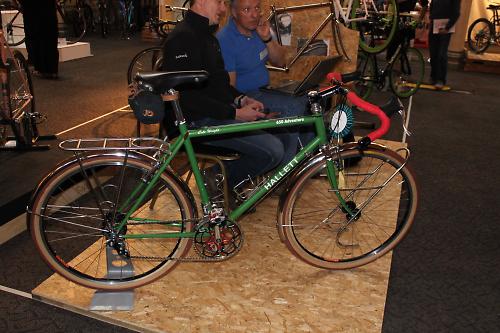 Sometime contributor to road.cc Richard Hallett won the Best Touring Bicycle class with his 650B randonneur, a thoroughly practical green machine with plush balloon tyres and bespoke racks front and rear also made by the builder. Hallett impressed the judges with the thoroughness of his approach, his attention to detail and the way in which he built a frame that enhanced the component choices made by his client.

Andrew Jones from Moss Cycles carried the track racing category with his stealthy black ’Gnaphosa’ named after a night-hunting spider that resides on his local riding country over Wybunbury Moss. 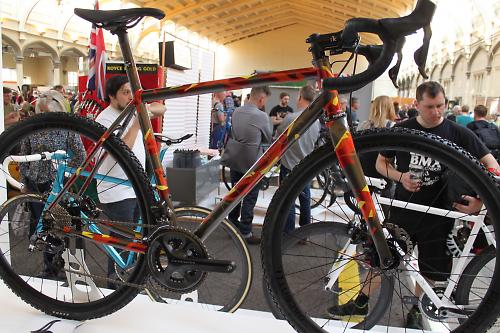 Best Use of Alternative Materials 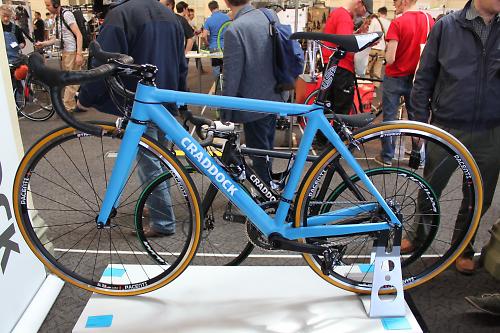 Richard Craddock from Worcestershire is one of only a very few builders in the UK custom-making carbon-fibre frames and his blue road model carried the day with simple uncluttered lines.

Caren Hartley won Best Utility Bicycle with her ‘Porkeur’ a hybrid of traditional porteur and a modern fat mountain bike built in Reynolds stainless steel for Rouleur photographer Camille McMillan so he can lug his camera bag about on adventures.

Timmy Rowan went on to win Best In Show, too, with his exquisite ’Do-It-All’ model. 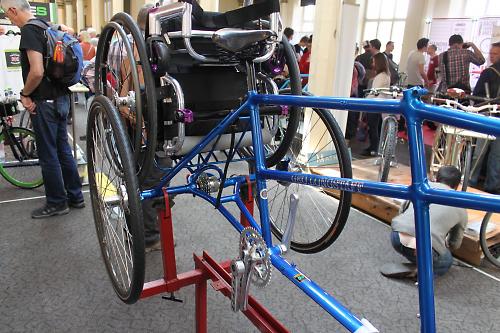 Long-established tricycle specialists Longstaff Cycles from Staffordshire won the Steve Worland Award for Innovation with a project that surely the late Steve Worland, a renowned cycling journalist and early Bespoked judge for the first three editions, would have approved. Their Jez Hastings was showing a unique mechanism for transporting a wheel-chair between the rear wheels of a tandem tricycle so that the chair user can ride on the rear seat of the tandem assisted by adapted ‘swinging’ cranks, and then have their chair ready at either end of the ride.

Photographer Camille McMillan, exhibiting his work at the Arnolfini Gallery part of the Bespoked show nearby and also a winner in the sense that his personal bike collaboration with Caron Hartley won the Best Utility Bike in the new builders rooms, also carried away the wide-ranging ’Spirit of Cycling’ Award for his moody and mostly black & white contribution to Rouleur Magazine over the years. 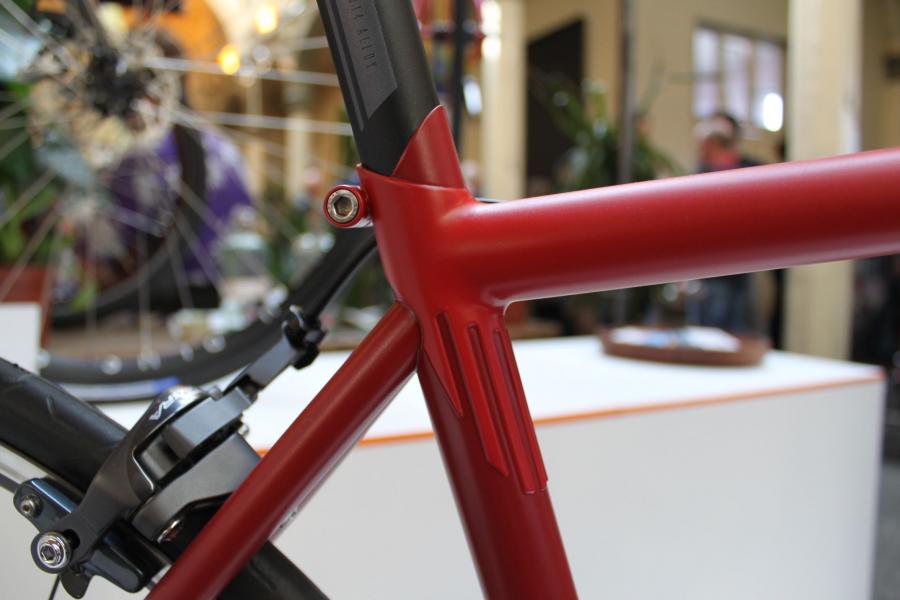 SaiTong Man from Satoma Cycles based near Cambridge deservedly won the Best Finish/Paint prize for his two-tone red racing bike that was ‘simply jaw-dropping in the quality of execution’, according to one of the judges.

Visitors to the show over Saturday and Sunday will have a chance to vote for their own favourite bike or product and the exhibitors themselves will be making a Peer Award, both presented at the end of the show.