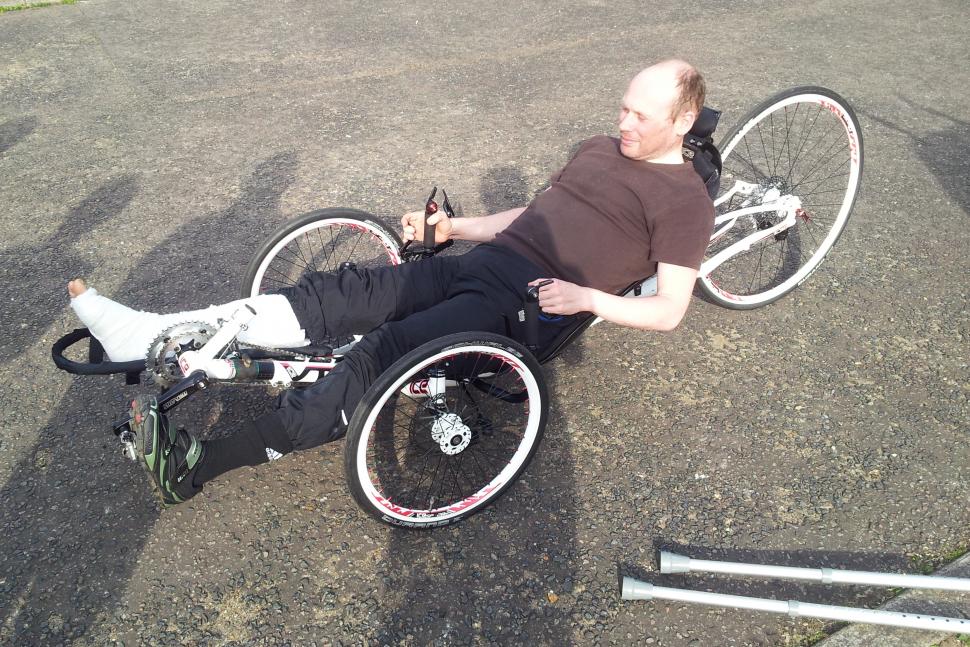 Year Record contender Steve Abraham is back on the bike after breaking his ankle in a crash with a scooter rider last month. But a spokesman for his support team says beating Tommy Godwin's 1939 record will now be "a tough ask".

Most of the ride comprised 17 laps of the circuit at Milton Keynes Bowl.

The ride was a test to see how Abraham copes with riding the recumbent, and to chart a safe route to the Bowl circuit.

After six hours on the bike, Abraham had a doctor's appointment to assess his recovery two weeks after surgery. 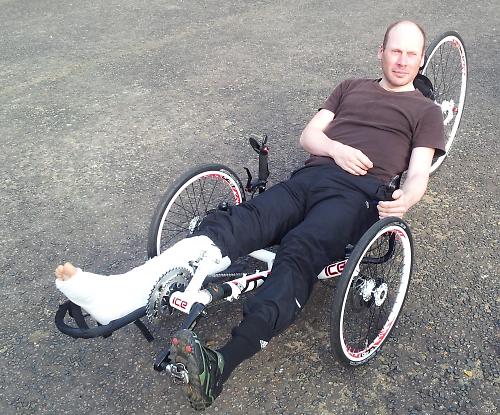 Today Abraham will try and ride a normal shift on the bike so that he and his team can assess what he is capable of using just one leg and after two and a half weeks' inactivity.

Steve's team expect him to improve by 10-15 percent over the next two weeks, and he'll be aiming to maintain that pace until he's capable of walking — and riding — again.

Spokesman for Abraham and his team, Idai Makaya told road.cc: "We are taking it a step at a time so we will need about two weeks before we can say if we'll stick with this approach or just stop completely until August.

"We believe this approach mitigates the losses against the record and gives him a chance to recover from the accident whilst minimising the distance he'll have to make up once he gets back to full fitness."

Abraham is now around 550 miles behind Godwin's schedule. If he is able to return to riding then he will be able to limit the damage, and then attempt to make up the losses when he returns to his planned summer schedule of very long days in the saddle.

Makaya says: "We think if it works well he has a chance of just eclipsing Tommy Godwin's record at the end of the year. But it will always be a tough ask.

"However, Steve's total mileage target was almost 10,000 miles further than the current record so he has that margin to lose in the teo months that he can't ride properly.

"Theoretically that says he has a chance."

Abraham's fans and followers greeted his return with enthusiasm and congratulations via the Strava comments.

Kieran Johnson wrote: "I tried riding one-legged yesterday because of a sore knee. Managed about 10 minutes at 20kph. Riding one-legged is HARD. Great to see you back in motion!"

Mark D. wrote: "Chuffed to see you back on the road - for your sake I hope your not hoping to build up to 200+mile days going round that loop, now that really would deserve kudos!"