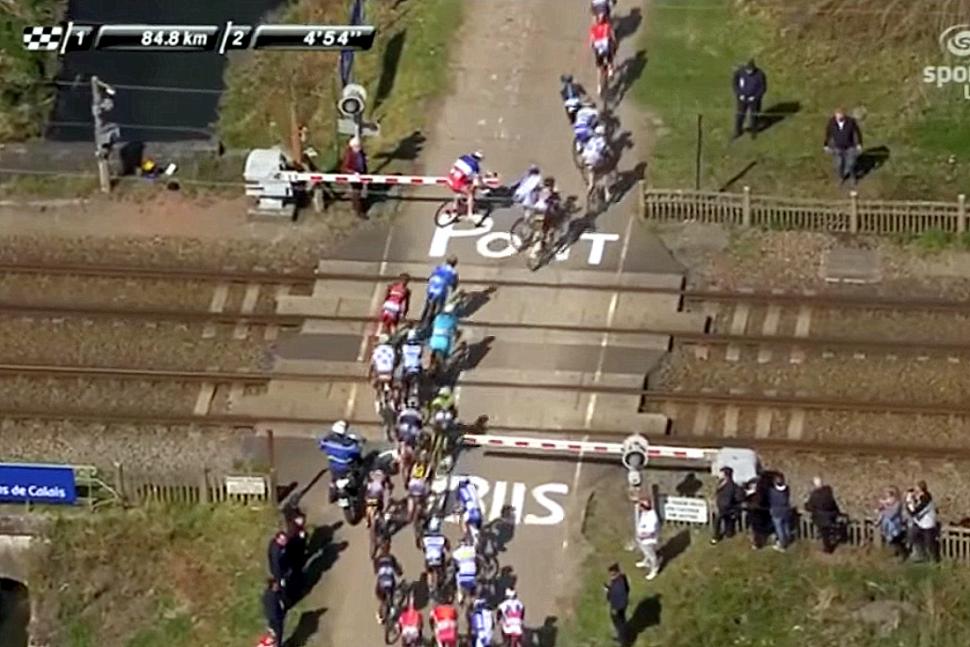 Although race officials decided to take no action against the cyclists who rode through a closed level crossing in yesterday's Paris-Roubaix, French rail company SNCF says riders should be prosecuted for acting "against all safety rules".

The barriers at a crossing in Northern France came down as riders approached, but a large number went round or even under them. One rider from the Lotto team was even clipped by the barrier as it dropped.

Seconds later a TGV hurtled through the crossing.

SNCF is, unsurprisingly, not impressed.

"Millions of television viewers saw live this extremely serious and irresponsible action which could have been tragic," the rail company said in a statement.

"A few seconds later, a TGV ran on this line and could have hit the peloton.

"SNCF has decided to lodge a legal complaint and will leave it up to the investigation to determine who was responsible. We regret that such foolhardiness took place."

While the lead riders in the group might be able to claim they were too close to stop safely as the barriers, video of the incident clearly shows some riders ignoring a motorcycle policeman's instructions to wait.

Guy Dobbelaere, president of the race jury, said: "It wasn't possible for the leading riders to stop sufficiently safely.

"By neutralising the race for a few moments to not penalise those who stopped, we respected the spirit of the rule."

The rule in question reads "It shall be strictly forbidden to cross level crossings when the barrier is down.

"Apart from risking the penalty for such an offence as provided by law, offending riders shall be eliminated from the competition by the commissaires."

However, Dobbelaere said some of the riders could not be identified during the race.

"In theory, those who pass when the barrier is down are thrown out of the race.

"This time, that would have been unjust in respect of those riders who weren't identified."

In 2006 the race's lead riders, Lief Hoste, Vladimir Gusev and Peter Van Petegem were disqualified for ducking under the barriers at a level crossing. The race was running ahead of schedule that year too, leading to what organisers called "an unpredictable accident de la course."

According to the Express there were 29 deaths at French level crossings in 2014. British level crossings have a rather better record, with 44 deaths over the last five years and just four in 2014.

French TGVs travel so fast that a driver may not even notice the train has hit someone. When a train hit a cyclist last year, the unfortunate rider's body was not found until it stopped at Mulhouse, close to the Swiss border, 40km away.

Network Rail's advice in its Level crossings for cyclists leaflet is:

• Check both ways before crossing – if there is a train coming, don’t cross

• Remain stationary until all the warnings stop

• Check that your exit is clear before crossing