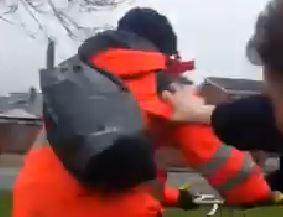 Footage of assault posted to Facebook, but social network declines to take it down
by Simon_MacMichael

A video showing a car passenger pushing a man from his bike has attracted hundreds of thousands of views on Facebook – but the social network has declined to remove it, saying it doesn’t breach its community guidelines.

Shot from the inside of a car, it shows the passenger leaning out of the window and giving the rider – who appears to be wearing a Royal Mail high-visibility jacket – from his bike as the vehicle overtakes him.

The cyclist lands on a grass verge, to the evident glee of the car’s occupants.

The video, which you can watch below, has also been viewed more than 250,000 times via a Facebook page called Young Rich Britain, where the vast majority of people commenting on it condemned the actions of the people in the car.

What is thought to be the original video – uploaded on Saturday, and also with around a quarter of a million views – was shared to the Stop Killing Cyclists group on Facebook, with user Tony Sanders urging people to report the video to the social network using its ‘I don’t like this’ facility.

However, he subsequently received a message from Facebook saying the video hadn’t been removed as it didn’t breach community guidelines, causing him to comment, “Facebook are seemingly happy that this wasn't a violent attack.”

We have asked Royal Mail whether they are aware of one of their employees being assaulted in such a manner.

It is believed that the Metropolitan Police have been notified of the incident, with the presumed original poster giving the location on Facebook as London, but the force was unable to confirm that it had been reported to them.