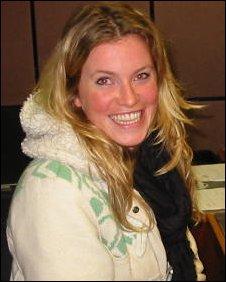 Cyclist sets off for South Africa with trio in tow

400 replies to request for cycling buddy
by Tom Henry

A cyclist who appealed for a travelling partner to ride to South Africa with her has set off – with not one but three companions.

Lindsey Cole, a 27-year-old journalism graduate, decided to make the 8,000 mile trip by bike to arrive in time for the World Cup.

But her mum feared for her safety alone, so Lindsey advertised for a bike buddy and got 400 replies. From those she selected three: Dickon Broadhurst, 27, who had planned a trip of his own down the Americas, until his friend pulled out; John Walton, 26, who'd been part of a Channel Swim Relay and had also volunteered to be a target for a bull, and Duncan Hills who once cycled from London to Taiwan for a £1 bet.

Lindsey, from Chalfont St Giles, said her new companions, all from London, stood out from the crowd.

“We've now met a few times but have five months to get to know each other,” she told This Is Local London.

She is no stranger to long-haul bike rides, having once cycled from Land's End to John O'Groats in just ten days – but it was not until last week, and a trip to Cycle Care in High Wycombe, that she first learned how to change a tyre.

Lindsey will be raising money for the SCI charity, which helps people in sub-Saharan Africa who suffer from tropical diseases. A last-minute raffle at her leaving party raised a further £250 for the charity.

“I've budgeted very small for the trip, so the raffle was greatly appreciated,” she said. “And everyone signed my bike, which will be motivating for the 8,000 miles.”