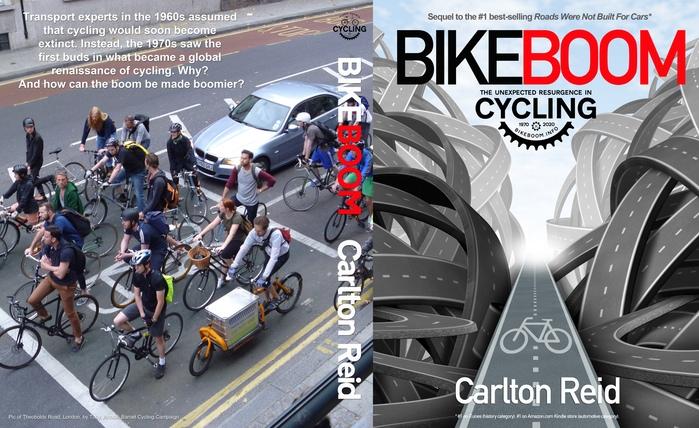 Carlton Reid, author of the critically acclaimed bestselling book Roads Were Not Built For Cars, is working on a sequel, called Bike Boom. As with its predecessor, he is seeking funding on Kickstarter for the venture and is already nearly three quarters of the way to achieving his £6,000 goal.

He says: “Use of bicycles in America and Britain fell off a cliff in the 1950s and 1960s thanks to the rapid rise in car ownership.

“Urban planners and politicians predicted that cycling would soon wither to nothing, and they did their level best to bring about this extinction by catering only for motorists.

“And then something strange happened – bicycling bounced back, first in America and then in Britain. Today's global bicycling boom – even the one in the Netherlands – has its roots in the early 1970s.

“And this is what I'd like to explore in Bike Boom, a book that will use history to shine a spotlight on the present, and demonstrate how bicycling in the future has the potential to grow even further, if the right measures are put in place by the politicians and planners of today and tomorrow.”

The money raised through the crowdfunding site will enable Reid to “see at first-hand those places that have either already built for high bicycle usage, or are planning to spend big on bicycling.

“Naturally, I'd like to spend time in the Netherlands and in Denmark and I'd also like to visit Seattle, Portland and New York in America, and Seville in Spain,” he adds.

The Kickstarter campaign is open until Tuesday 17 March and as at the time of writing, 126 backers have pledged a combined total of £4,316.

Reid, executive editor of the website, BikeBiz, told road.cc that he hadn’t planned on writing a sequel to Roads Were Not Built For Cars when it was published.

“I was asked by lots of people what my next book would be about,” he said. “I rolled my eyes and said there would be ‘no next book.’

“I spoke too soon.

“I’ve relented [ie, gone soft in the head, forgetting the pain from the last time] and am going to write a book called Bike Boom.”

Given the reception Roads Were Not Built For Cars received, it will not only be worth waiting for, but also worth backing on Kickstarter - and we know for a fact that plenty of the previous book's backers found it through road.cc.

Rewards start at £1 for a credit in the book, £8 for a Kindle version and £19 for the softback edition all the way up to £1,095 for Reid to give an illustrated talk anywhere in the world outside Europe or North America.

In this video, Reid introduces his new project on Kickstarter.