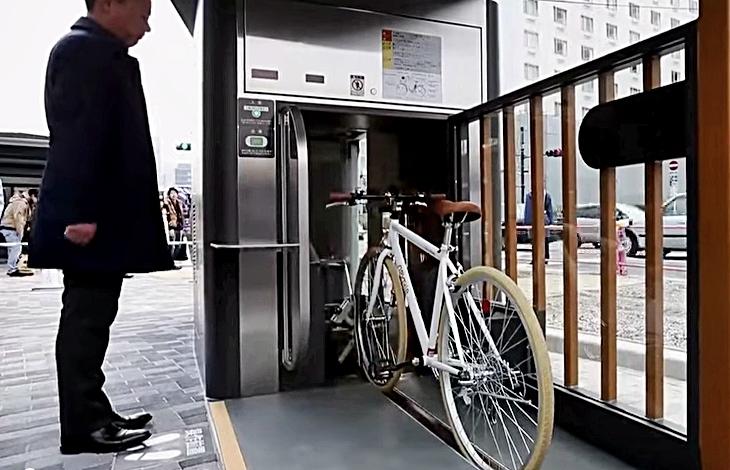 Ever locked your bike in a busy location and still felt it was less than secure? Maybe you’d feel better if you could have a robot lock it away in an underground vault, away from thieves and bad weather. If you haven’t seen Giken's ECO Cycle system in action before, here’s a video. Tell us you aren’t impressed.

Of course you are. In fact so impressive is the facility that it's become a bit of an internet meme returning at regular intervals. This is actually the second time we've written about it and the third it's featured on the site. The first occasion was waaaay back in 2009, but sadly that story is so old it's actually fallen out of our archive here's a link to the video we based it on or was it this one? Hey, it was a long time ago - and either way the best video about this particular bike park is from when the BBC took an access all areas look inside back in 2013.

The facility, located at Tokyo's Kasai Metro Station, can store hundreds of bikes - 144 per underground bunker, returning each one to its rightful owner within seconds. It works via an ID tag on the front fork and an associated owner’s card so that the machine knows which bike to select when you return to collect.

But it’s the mechanics of the operation that are most impressive. Take a look.

When stored, bikes are aligned in a zigzag pattern to prevent handlebars hitting each other and to make maximum use of the available space. It’s fast and efficient and Giken have gone on to install similar facilities in a number of locations throughout Japan.

In 2013, we reported that a couple of Dutch automated bike parking designs were due to be sold in Britain. Originally developed for the Dutch Railways OV Fiets cycle hire scheme, the VelowSpace is based on a carousel, in which 24 bikes are effectively parked in a ring with their front wheel in front.

The VeloMinck, however, has more in common with the ECO Cycle system. It picks up bikes and transports them to a secure storage space, retrieving them when the cyclist requests theirs using a barcode or swipe card.