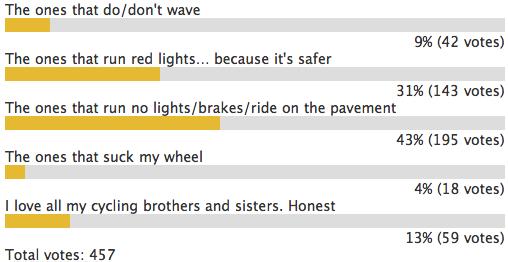 Readers' poll - what irritates you most.png

Law breaking varmints get your goat
by Simon_MacMichael

While the mainstream press often seems keen to reinforce an “us against them” angle when addressing issues such as anti-social cycling, the fact is that most adult cyclists are car drivers too and share many of the same concerns about fellow riders who ignore the law, a finding overwhelmingly supported by the results of our latest readers' poll.

With almost 500 votes received from around the world, three in four road.cc readers cited breaking the law as the aspect of other cyclists’ behaviour that irritated them most.

That breaks down just to over four in ten who said that people who run no lights/brakes/ride on the pavement annoyed them the most, while nearly a third claimed that people who go through red lights because it’s safer were their biggest grumble.

The former provoked a lively debate about the merits – or otherwise – of riding brakeless, with reader Neilwheel citing the example of someone who has apparently bought into the whole fixie hipster image recklessly careering, without brakes, down the steep incline of Glasgow’s Buchanan Street.

And on the subject of red light jumping, some, such as Barry Fry-Up, pointed out that whether it makes you feel safer or not, the fact is, it’s illegal, and the minority doing it give rise to negative perceptions of cyclists generally.

Neil reckons “it’s only a matter of time before Disgusted Of Tunbridge Wells fumes to the Daily Mail about the 'Fixie Craze menace on Britain's Streets'. It's not a case of 'if'; its 'when'. They'll have a field day...and for once in their history, there'll be an element of truth in what they say. It'll put cycling's image right back into the gutter, right back to the days of the 'lycra-lout' fury.”

Around one in eight respondents took a Zen-like approach, saying that they loved all their cycling brothers and sisters, presumably including The Cakester, writing all the way from Japan, who supported The Hatter’s view that it was more productive to chill out and not get upset by others’ transgressions, while fewer than one in ten mentioned cyclists who do or don’t wave as their biggest grouch.

Fittingly bringing up the rear as a cause of discontent were wheelsuckers, which we’d like to think is because our readers ride quickly enough to not be bothered by them, rather than going too slowly for there to be no point in their being slipstreamed in the first place.

Other issues mentioned by readers that weren’t covered by the poll included saddles so low that the cyclist is pretty much sitting on the top tube, riders wearing headphones in traffic and people going lidless, thus giving car drivers ammunition to criticise them for not wearing a helmet.

Meanwhile Jon Burrage cited a bike with “shopping bags on each bar end and a small girl, about 2 years old, balanced on the middle of the handlebars while the adult (perhaps dad?) crossed a busy junction in a gap between traffic,” a situation that Jon summed up in one word – “mental.”