This Sunday, 24-year-old Rohan Dennis, fresh from winning the Tour Down Under, will attempt to break the Hour record. BMC have unveiled the bike, a slightly modified Track Machine, that he’ll use for the attempt.

The Hour record currently stands out 51.852km, set by Swiss rider Matthias Brändle last year. Dennis certainly has record breaking credentials; he won a silver medal in the team pursuit at the London 2012 Olympics and took second in the Australian National Time Trial Championships earlier this year. And of course there’s his win the Tour Down Under, indicating he at least has good form at the moment. So to his bike. It’s a BMC Track Machine, and is actually is an existing bike in the Swiss company’s range and Dennis will ride a production frameset - unlike the specially prepared bike that Canyon had to produce for Alex Dowsett’s attempt, now postponed due to injury. 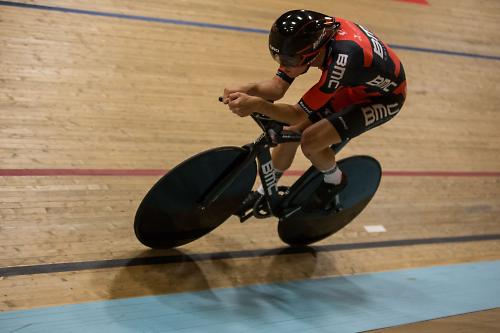 Of course there are some modifications. From a training session with Rohan Dennis last year to work on his position, BMC have taken this data and produced a specific version of the fork hinge and stem front-end with a 3T Brezza II Nano Ltd handlebar. It's a small change but in the race against the clock any gain, no matter how small, can make the difference. The Track Machine is decked out with a Shimano Dura-Ace chainset with 175mm arms, and an SRM Powermeter. He’ll sit, or squirm uncomfortably, on a Fizik Arione R3 Braided saddle. Wheels are carbon fibre discs front and rear, there’s no indication who makes them. The tyres are Continental Tempo 19mm inflated to 15.5 bar. That’s 224 psi. The Track Machine has a frame and fork designed specifically for track riding, the aerodynamics have been designed to optimise the constant 0 degree yaw angle it encounters, compared to road going time trial bikes that must also be considerate of cross winds. No cross winds in the velodrome you see. The frameset has what BMC refers to as the “subA” which is the combination of 3:1 teardrop and truncated main tubes, tripwire technology, a minimal frontal surface area, and an integrated hinge fork. It’s all made from carbon fibre so it’s light, at 6.4kg too light for the UCI’s 6.8kg minimum weight limit. The team mechanics will need to add some ballast. Yes that’s right, the UCI sets the same weight limit for road bikes as it does for track bikes used in the Hour record. 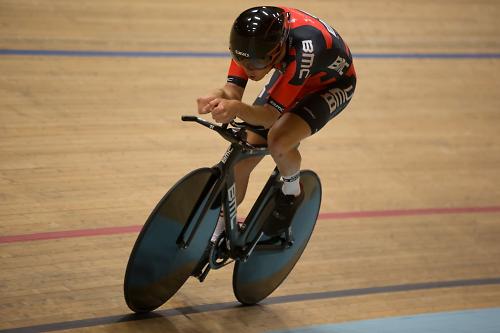 You’ll be able to see how Rohan Dennis gets on with his attempt on his BMC Track Machine at this live feed.

2015 is set to be the year of the Hour record, with more athletes lining up for it all the time. Have a read of our Hour record guide here.