We've had a quick trawl round the halls ahead of proper press day, here are some of the things we've seen...
by dave atkinson

Hello from Core Bike! We're here treading the garish carpets of Whittlebury Hall near Silverstone for another year at the trade show where the UK distributors of cycling's top end brands show off their wares. There's lots to see, and we'll cover it all in detail in due course, but here are some highlights from our first trawl around the rooms. So stay tuned for more!

Kinesis have been busy since Dom Mason left to set up Mason Cycles. There's no less than four new frames on their stand at this show. Okay, three of those are disc versions of bikes that already exist, but there's a lot of detail work being done on getting them just right. The one that's not a disc version of something currently in the range is the Tripster Ace, which is a flat-barred, alloy-framed city bike in an £800 build. Kinesis used to have an alloy Tripster under the Decade sub-brand a few years ago, and they've had many requests to resurrect it: this is the result. The build is Shimano Sora with Tektro Vela hydraulic discs and Kinesis' own wheels.

Kinesis' GF_Ti is getting the disc treatment too, this is a prototype frame but it's not far off being ready. The addition of discs to what's a mudguard-ready, mile-munching frameset makes a lot of sense. This frame, and the new Racelight 4S Disc frame that's also in development, both use Shimano's new flat-mount disc standard. We haven't seen the flat-mount callipers in the flesh yet but Kinesis have, and it's clearly the way road discs will be going in the next few years. The mount plus the redesigned calliper is a lot neater and saves about 100g over current setups, according to Kinesis. For the moment though, the bikes are wearing standard post mount callipers with an adapter to get them in the right place. Kinesis also have a fork on the way that uses the flat mount standard. The one on display, fitted to the 4S Disc, was just a rapid prototype, but it's currently in testing so it isn't too far away from production. Kinesis have done a lot of work with the crown to get the maximum amount of clearance whilst keeping a road geometry; they reckon it'll be possible to run a 35mm tyre in the new fork. 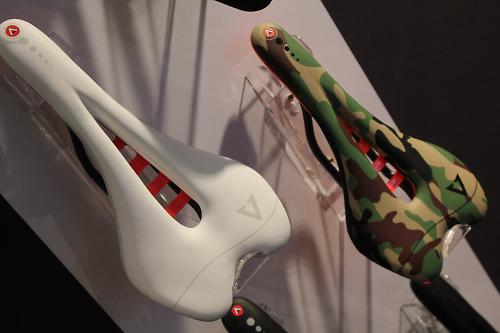 Astute saddles are at Core Bike. They're not a brand that have had a lot of exposure in the UK, but they certainly make some interesting seats and they're all completely hand made in Italy. They're now coming to the UK through distributor Saddleback. The range goes from the Skycarb, which retails for not much shy of £300, down to the Skyline range at around the £100 mark. They're race sadlles, and the tope-end ones are impressively light. The Astute saddles share a twin-shell construction; the outer is sandwiched between the two and the result is a very neat underside. The high-end saddles are carbon, of course, with nylon outer and carbon-reinforced nylon inner shells used for the less expensive models. Carbon rails (with elastomer suspension at the rear) give way to Titanium down the line. The Astute range are all available with or without a central cavity, and there's two sizes of chassis, 135mm and 145mm. The narrower saddles have a two layer core with an extra insert at the nose, whilst the wider ones get a single layer (plus insert) but made from two different stypes of foam moulded together: firmer at th back for more support, and softer at the front. 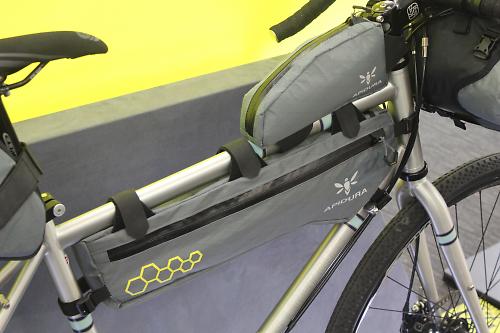 Bikepacking was one of the areas we thought we'd see a lot of activity at Eurobike last year, but actually the gear was pretty thin on the ground. UK brand Apidura had a stand though, showcasing their ultra-light luggage, and now they've picked up distribution via Ison we should be seeing a lot more of their gear in stores across the UK.
Apidura do a wide range of bags for both road and mountain bikes, and it looks just the ticket for minimalist touring or racing the Transcontinental. Or maybe just adding a bit of extra stowage space for that Audax. Anyway, we'll be getting some in. Bont have two new shoes. The Blitz is the successor to the excellent A-three and will cost you about the same, £130 RRP. Like the A-three it uses Bont's heat-mouldable carbon footbed, but now you get a Boa closure and an improved rubber toe bumper. It looks like it'll be another excellent race shoe. 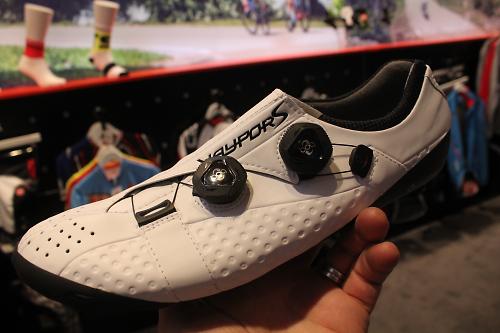 The Vaypor stays at the top of the range but now there's an even-more-exclusive Vaypor S, which is lighter and features go-faster golf ball dimpled fabric upper. It gets the improved toe bumper too. 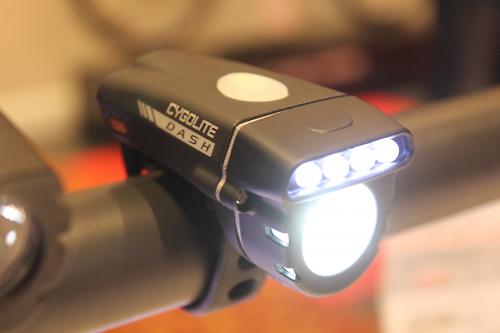 Distributors Extra will be bringing in Cygolite lights from this year, so they'll be one to look out for next time you're shopping for a new light. They have a range of commuter options; we were quite taken with the Dash 320 USB which incorporates two lights. There's a row of four small LEDs that function as a town light, and below that a high-power single emitter that'll light your way once you've left the streetlights behind. It's USB rechargeable and the 320 refers to its claimed lumen output, which should be enough for a bit of back-lane fun. Cygolite also have a range of rear lights. This one is the Hotshot Micro 2W which packs a hefty punch for getting you seen on busy roads, and an array of flashing options. All of the above will make you less than popular on the club run, so Cygolite have included a steady option too, and you can adjust the brightness of the LED manually to suit. Nice work. Poc have a new range of clothing called raceday, which is focused on aero advantage. Aero's a big thing right now so that's not a surprise. Their main thrust with the range is that in terms of the time saving you can expect, versus the outlay, aero clothing is a lot better value than splurging on a disc wheel or a new frame. And they've got a big table with wattage savings and costs to back it up, based on their own wind tunnel tests. 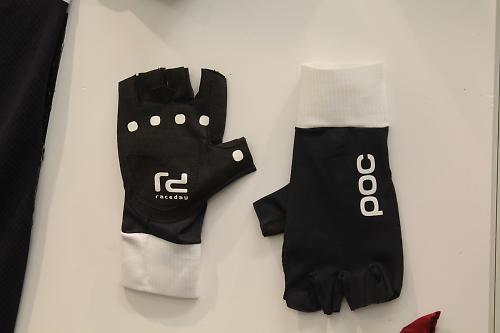 Anyway, the kit looks interesting and it uses a variety of textures and form-fitting features such as laser-cut sleeves and dimpled fabrics to make you as slippery as possible The jacket is a particularly interesting fabric; it feels a little like cotton on the outside and Roubaix lycra inside and it's very stretchy and closely fitted. There's a dimpled section behind your head which is also reflective, as are the sleeve logos. 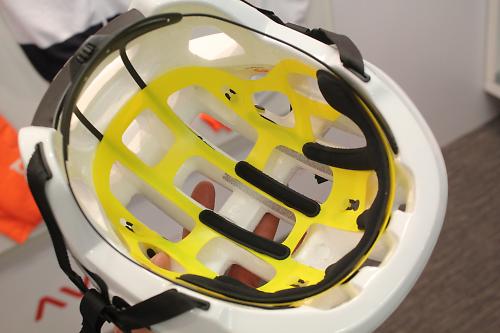 Poc also had a new MIPS version of their top-end Octal helmet. MIPS is a system that uses a low-friction layer between the head cradle and the helmet body that allows the two to move relative to one another to reduce the possibilty of rotational brain injuries. Discs are still a thing. Novatec are now making a disc version of all their road wheels, including deeper section ones like the £1,359 R5. They're sticking with 6-bolt disc fittings but Reynolds - more on their new wheels tomorrow - are moving over wholesale to Shimano's Center-Lock and significantly widening their range. 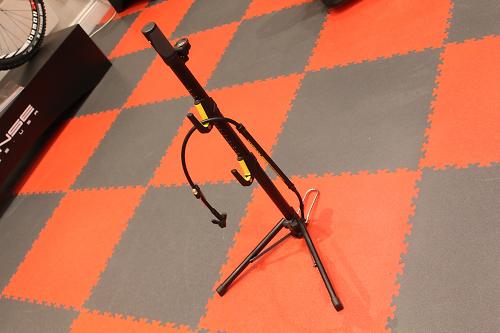 Topeak had this interesting pump, The Transformer RX. It's part pump and part bike stand: it uses two hooks to hold your chain and seat stays much like those stands you often see in bike shops. Anyway, it means you can stand your bike up to get it ready for your race/sportive, and then pump your tyres up before you go. A good one for the back of the car? It'll retail for £79.99. 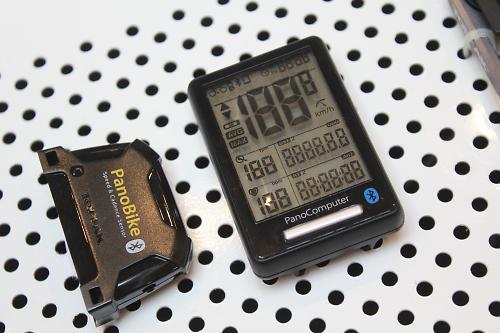 Also from Topeak is this Panobike computer, which is designed to sync with your phone via Bluetooth and give you a heads up on data from your bike sensors via Topeak's Panobike app. This is a growing area in bike computers as more and more riders switch to their phones for recording their rides. The computer has five main data fields so you should be able to get a good overview of how your ride is going without having to dig your phone out of its freezer bag in your back pocket.

Anyway that's it for now, we're off to put our noses in the trough at dinner. More from Core soon!