This is the brand new Ridley Noah SL, decked out with Campagnolo Super Record EPS and Bora Ultra deep section wheels, and it belongs to Greg Henderson. The Kiwi has been riding on the Lotto-Soudal (previously Lotto-Belisol) team since 2012 and is currently racing at the Tour Down Under, which is where this new team bike was photographed.

Sponsored by Belgian bicycle brand Ridley, the Lotto-Soudal team have a number of bikes to choose from. The Helium SL is the lightweight all-round choice favoured by most of the team, and the Noah is their aero road bike. Henderson favours the Noah, as does team sprinter Andre Greipel, as they both rode the previous Noah Fast model through last season.

This is the new Noah SL though, a lighter version of the long-running Noah Fast that was launched at Eurobike last year. A number of changes have netted a 950g frame weight, according to Ridley. Underneath the paint, Ridley say they’ve reworked the resin and carbon layup, and the specifics of the layup, to reduce the weight without compromising stiffness. The big penalty with aero bikes previously has been increased weight, on account of the large tube profiles necessary, but the weight of the latest generation of aero bikes is starting to come down. Sub-kilo for an aerodynamic road bike is respectable stuff. Aero bikes might be all the rage right now, but Ridley have been working on their aero road bike model for a good few years. We were impressed when we reviewed the previous Noah Fast a couple of years ago. One of the key features of the Noah, and which sets it apart from other aero bikes, are the moulded strips, called F-Surface. Raised strips are applied to the leading edge and they’re designed to delay flow separation and keep the air attached for as long as possible. The idea is to trip the passing air into turbulence, shifting the separation point further along the tube, because the longer the air is attached to the surface, the lower the drag. When air separates from the surface a small area of low pressure is created producing drag.

Another key feature is the F-Splitfork. There are two slots on both fork legs and the idea here is to air to flow through these slots and reduce the air pressure between the fork legs and wheel, again to reduce drag.

The other big change, and more immediately noticeable, has been the switch from the integrated V-brakes to regular caliper brakes. The rear is still mounted on the seatstay assembly, and the front moves from behind the fork around to the front.

Elsewhere, there’s an aero seatpost with the seatclamp hidden in the top tube, a tapered head tube and internal cables. Judging by his bike setup, we reckon Henderson has been spending too much time in the company of Adam Hansen, because it’s best described as aggressive. We wouldn’t recommend such a setup. Henderson stands 5’9” tall and combines a 140mm stem, with a negative rise lowering the bar height substantially, and saddle slammed very far forward on the inline seatpost. There’s no concession to comfort here, it’s clearly about speed and aerodynamics. 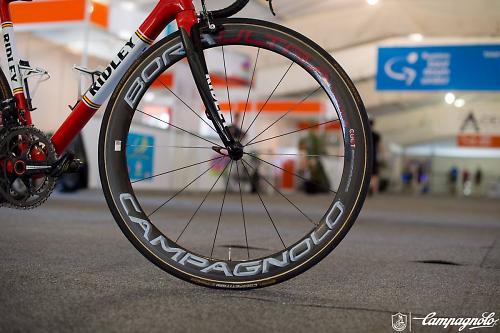 As they were last year, Lotto-Soudal are being supported by Campagnolo, so it’s Super Record EPS groupsets all round, matched to Bora Ultra TWO wheels, with CULT ceramic bearings. The team rely on SRM Power meters to monitor their efforts.

Deda continue to sponsor the team with handlebars and stems, and San Marco provide saddles. Henderson favours a Regale model. Bottle cages are from Tacx and tyres are Continental.