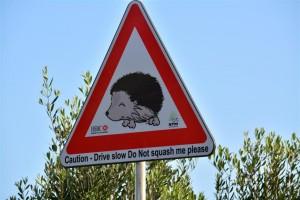 Cyclists in Malta get spiky over Mind the Hedgehog signs

Drivers warned to look out for small mammals - but where are ones for larger MAMILs and others on bikes?
by Simon_MacMichael

Cyclists in Malta are getting spiky over signs that have sprung up around the island that warn local drivers to watch out for hedgehogs, while there are none telling them to look out for bike riders.

The Mediterranean country’s cycling campaign organisation, the Bicycling Advocacy Group, say they have nothing against the little mammals – nor indeed any other wildlife.

In fact, it was cycling advocates themselves who put up unofficial ‘Mind the Hedgehog’ signs as a satirical response to signs that appeared in Sliema telling cyclists aged 12 and above they were banned from  riding their bikes on the promenade there.

While the ‘Mind the Hedgehog’ signs clearly struck a chord with the authorities, calls for ‘Mind the Cyclist’ signs to be erected on the town’s Tower Road, as well as installing sharrows – painted logos on the road alerting motorists to the presence of bike riders – have been ignored, say campaigners.

One said, “It’s really bizarre. Malta has the worst cycling culture in the EU, a really oddball pedelec law that has pedelec riders wearing helmets, yet ordinary bikes don’t need this.

“Malta also has some of the worst congestion problems in the entire EU, yet little is done to encourage cycling. So splashing out on 60 Mind the Hedgehog signs is bizarre!”

In response to the ‘Mind the Hedgehog’ signs, some cyclists have suggested that people on bikes should wear hi-viz vests with the silhouette of a hedgehog on the back – to give them greater protection on the road.

Nature Trust president Vince Attard told the Times of Malta that 91 hedgehogs had ben saved during 2014, but maintained that drivers needed to display “more awareness” about them.

He said: “Sometimes a mother is killed and its babies stay next to her in an attempt to get milk and end up dying anyway.”