Back to news
news
Innovation
Art and design 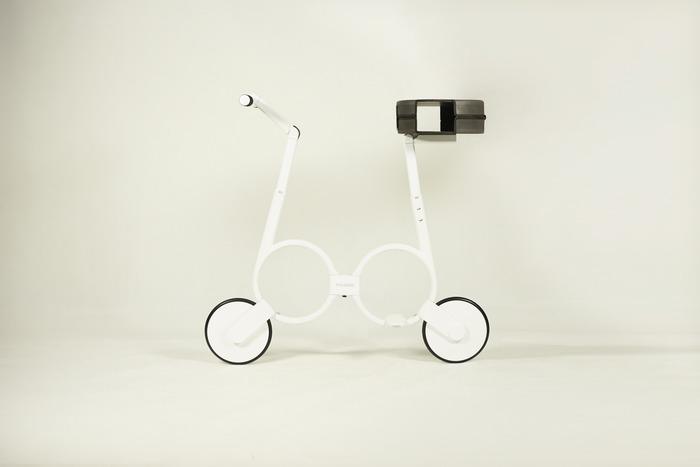 The folding electric bike that fits inside a backpack (+ video)

Impossible Technology looking for backers via Kickstarter
by Alex Bowden

Impossible Technology is looking to launch an electric bike which will weigh just 5kg and which will fold away to fit inside a backpack. The firm is currently looking for funding via Kickstarter.

Impossible, who describe themselves as ‘an eclectic mix of professionals, hobbyists, and specialists’ have been looking to produce a bike that is light, compact and durable and believe they have come up with such a design. However, money is needed for the creation of the ultra-thin engines which will fit inside the front wheel, which is why they have turned to Kickstarter.

It is an interesting design, by any stretch – although whether or not it is ‘pleasing to the eye’ as the designers assert is perhaps a matter of opinion. The frame is built around circles instead of a single horizontal girder to ensure that the bike spreads weight evenly across the frame and the seat and handlebars are at similar heights so that the front and rear wheels bear the weight of the rider equally. One of the most striking elements is the saddle, which doubles as the carrying case.

The frame is primarily made of carbon fibre with the ‘connecting box’ in the middle made of steel. The designers say that this box can easily bear the weight of a rider up to 85kg/180 pounds and that it can also withstand the everyday shocks which come with usage.

We’ve previously tried out the Yike Bike, which is basically a folding, electric penny farthing. It is larger than the Impossible and offers shorter range, but with a 100kg weight limit it can potentially be used by a greater proportion of the population. The carbon fibre Yike weighs 11.2kg and boasts an 8.7 mile range.

Earlier this year, we also reported on the Gi Bike which again is being launched via Kickstarter. At 17kg it is much larger than both Impossible and the Yike, but it offers over 40 miles on battery power alone which can also be extended by reducing the level of electrical assistance.

One of the Gi Bike’s major selling points is that it is said to fold in a mere three seconds. Impossible Technology say their bike is also easy to use. They describe it as unfolding in four easy steps at which point you “simply point the front wheel in the direction of travel and off you go.”

For more information, you can take a look at their Kickstarter project.