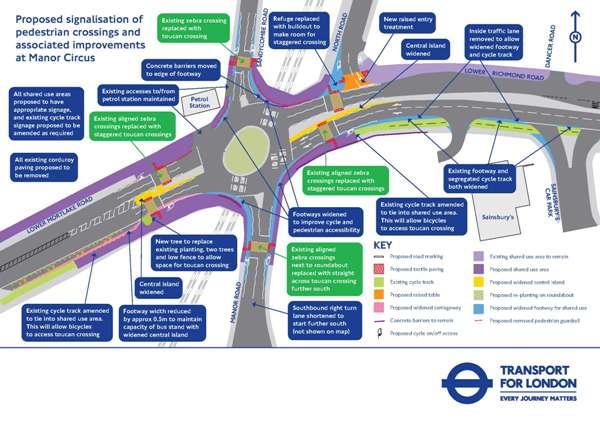 Transport for London could do more to improve junction where cyclists was killed this year, says councillor and campaign group
by Sarah Barth

A dangerous junction in Richmond will not be improved enough in proposed Transport for London (TfL) works, campaigners and a local councillor have claimed.

In the 36 month period to October 2013 there were three pedestrian collisions at the Manor Circus roundabout, three incidents - one fatal - involving cyclists and three involving motorcycles.

In total 15 collisions occurred at or on the approach to the roundabout during this period - leading TfL to consult on plans to improve safety there.

Earlier this year we reported how a cyclist died from injuries sustained when he was hit by a refuse lorry at the roundabout.

The victim, 40-year-old Henry Lang from Twickenham, was taken by air ambulance to the Royal London Hospital in Whitechapel but died there of head injuries.

All the road crossings at the roundabout are zebra crossings, meaning cyclists are supposed to dismount to use them.

TfL wants to replace these with toucan crossings which can be used by both cyclists and pedestrians - and some would have a wider central island.

Richmond Cycling Campaign told This is Local London that although they welcomed improvements, the plans introduced "severe disutility for pedestrians", and did not go far enough to create a safe cycling environment

An RCC spokesman said: "The introduction of on/off slips for cycling is going to be confusing for everyone involved.

"By providing the markings, it isn’t really clear where people should expect to be cycling or indeed where other road users might expect to see someone cycling."

Councillor Jean Loveland said: "The Manor Circus junction is not going to be the best for cyclists unfortunately, but we need to try to find ways to get their routes made continuous and as safe as possible."

"Our proposed changes are part of our plans to make facilities more consistent and improve continuity for cyclists along the A316.

"As part of the Mayor’s vision for cycling we want to encourage more people to cycle by making it as accessible as possible."

Make your own views known here.