Studies say investment in cycling would save NHS billions

Reports commissioned by British Cycling and CTC were released ahead of yesterday's Parliamentary debate...
by Simon_MacMichael

Two academic studies published yesterday, one conducted for British Cycling, the other for CTC, have highlighted the benefits that getting more people onto bikes could bring the country. Both were released to coincide with the House of Commons debate into progress on implementation of the recommendations of last year’s Get Britain Cycling report.

The one for British Cycling, which partnered with law firm Leigh Day to commission it, was carried out by Dr Rachel Aldred of Westminster University and one of its headline findings was that increasing the share of trips by bike here to the levels seen in Denmark would save the National Health Service (NHS) £17 billion over two decades.

The key results have been summarised in this infographic, and you can read the full study here. 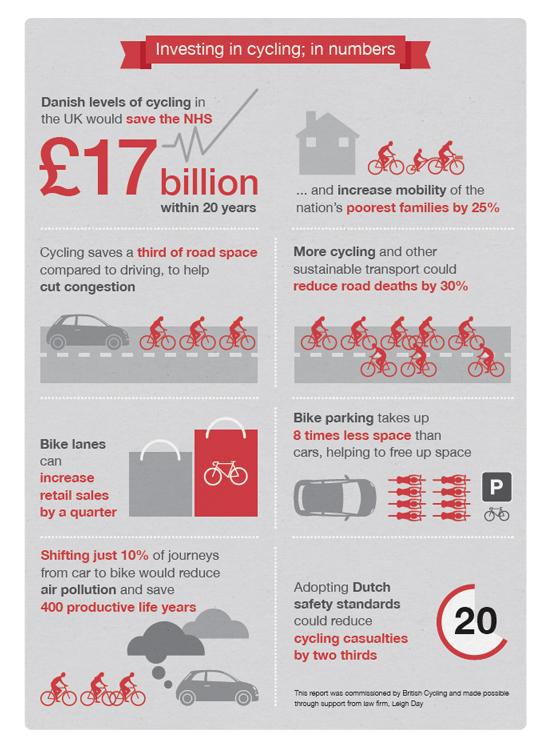 British Cycling policy adviser, Chris Boardman, said: “This paper shows that more cycling would touch the lives of all Brits in a positive way – whether they themselves choose to use a bike or not. Investing in cycling would make a massive difference to all of society.

“We only have to look to Denmark and the Netherlands – countries that regularly top surveys on being the happiest and healthiest nations in the world – to see what a transformative effect cycling can have. This is about creating better places to live.

“I hope that this paper helps politicians from all parties to see the bigger picture – that investing in cycling and giving it a proper showing in party manifestos will have long-term benefits for people across Britain,” he added.

A copy of the report was sent to every Member of Parliament ahead of yesterday’s debate, which came hours after the Department for Transport had surprised cycle campaigners by issuing its long-awaited Cycling Delivery Plan, which was criticised for its lack of ambitions targets and failure to commit to dedicated funding for cycling.

“The fantastic thing about investing in cycling is that it can generate benefits in a range of policy areas,” said Dr Aldred, a sociologist and senior lecturer in transport.

“Whether the goal is quicker urban journeys, improving life chances for low income people, revitalising town centres or reducing the growing burden of non-communicable diseases - cycling can be part of the solution.

“The recommendations in the Get Britain Cycling report provide a starting point,” she went on. “Fundamentally, we need a change in mind-set among politicians and policy-makers.

“Rather than just telling people they should cycle, we need to create a Britain where it's safe, easy and fun for all ages and abilities to cycle. This requires sustained funding, a step change in infrastructure, and policy, legal, and regulatory changes to redress the traditional bias against cycling within transport policy.”

They modelled three separate scenarios. One is based on the Department for Transport’s National Transport Model, which has been criticised for its assumption that levels of cycling will peak next year and then gradually decline.

The second, called “Slow Start” assumes that the DfT scenario would prevail until 2025, when real investment in cycling would kick in. The third, “Go Dutch,” sees “susbstantial pro cycling investment and policies begin in 2015.”

Under the latter scenario, which would see cycling miss its Get Britain Cycling report target of 10 per cent of trips by 2025 but meet the 2050 target of 25 per cent modal share, the NHS would benefit from savings of £25 billion over the next three and a half decades.

The study can be found here.