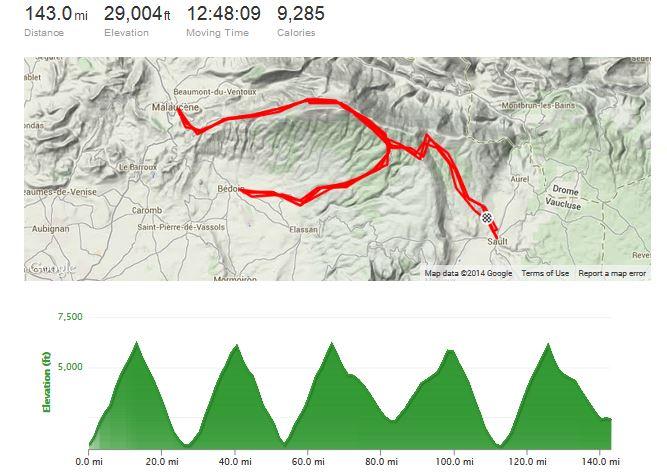 Chris Ward is only the 13th Briton to complete the Bicinglette challenge - and at 50, the oldest
by Simon_MacMichael

London cyclist has become just the 13th Briton – and the oldest among them – to complete a challenge to ride up and down Mont Ventoux six times, greater than the height of Mount Everest.

Entrepreneur Chris Ward, who turned 50 in June, undertook the mammoth ride in memory of his father and to raise awareness for the Alzheimer’s Society charity.

Here’s a short film of his efforts – it does contain some swearing, so it’s probably best not to have the speakers on if you’re watching it in public. He’s also posted data of the ride, in September 12, to Strava, although his battery ran out prior to the sixth ascent.

On his website, Chris posted the Monday after completing the challenge: “Well I managed it. Much of that was because my wife Helen followed me up in a car from the bottom for the last ascent, starting at 11pm!

“And the only reason I started the sixth was because of all the support - much from total strangers – but fellow cyclists! – that I was getting through social media. Thanks very much.”

It’s far from the first cycling challenge he has set himself – others include riding the entire route of last year’s 100th edition of the Tour de France, where Chris Froome won on the Ventoux to help seal his overall victory.

While the total height gain during the ride was greater than the height of the world’s tallest mountain, it doesn’t qualify as an official Everesting ride because it did not stick to the same climbs and ascents each time.

There are three separate routes to the summit of Mont Ventoux, last year our own Vecchiojo wrote about riding all thee in a day – from Bédoin, Malaucène and Sault, the latter joining the Bédoin at Chalet Reynard, where the trees give way to the lunar landscape the mountain is famous for and Chris rode all three, as required by the rules.

He would have had to go some to break the record for the most ascents in 24 hours, though – set in 2006, that is held by Jean-Pascal Roux and stands at 11, all of them made from his home village, Bédoin.

1
Cyclist driven into by Range Rover driver blasts "victim-blaming twaddle" from police who initially refused to take action
2
Commonwealth Games marshal verbally abused by cyclists and motorists for enforcing road closures
3
Pro cyclist no longer rides alone after two 'bikejacking' attempts as violent incidents increase
4
Five cool things coming soon (but on a budget) from Vittoria, Decathlon, Topeak, Hutchinson and Formbeat
5
Dual carriageway time trials suspended after cyclist killed on A11
6
Road rage motorist assaults cyclist and steals his camera after accusing him of ‘not riding in the bike lane’
7
Near Miss of the Day 810: Reckless overtake towards oncoming cyclist and bus… and some afters from the impatient driver
8
Drug driver sentenced to 21 months in prison for killing cyclist – seconds after using his phone to text friend