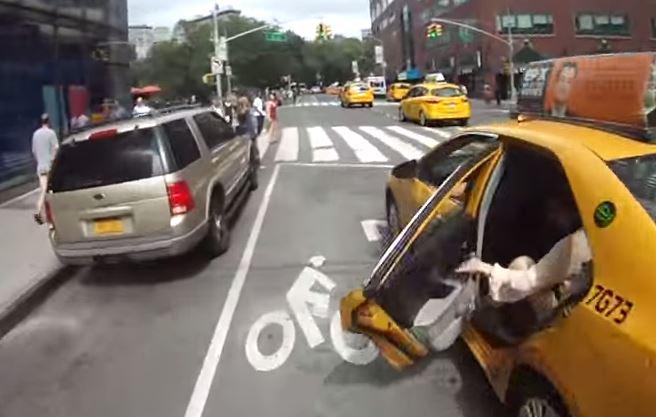 Video: New York City cyclist doored by passenger exiting cab - and everyone has an opinion

Dan Connor says this is why he doesn't ride in bike lane - and in London, Green politician Jenny Jones gets doored too...
by Simon_MacMichael

A New York City cyclist has posted a video to YouTube that shows him getting doored while riding in one of the city’s cycle lanes by a passenger exiting a taxi. It’s a problem for cyclists the world over – this morning, Green Party politician Baroness Jones took to Twitter to talk about being the victim of a similar incident in London.

New York City cyclist Dan Connor was riding towards Union Square in Manhattan,  with a cycle lane running alongside the kerb changing, after an intersection, into one that runs into the outside of a parking lane.

That creates what many refer to as the ‘door zone,’ but it’s not the door opening from a cab pulling up to his left that fells the rider, though – it’s a passenger getting out of one on his right, with the taxi apparently unable to pull into the kerbside due to vehicles being parked there.

After the cyclist declines offers of having an ambulance called, he gets back to his feet, the situation descends into an exercise in finger pointing.

The taxi passenger is apologetic to the cyclist, but gets upset when the taxi driver puts her in the wrong, he in turn is worried about damage to his vehicle, while the rider concerned about his bike.

Meanwhile, any number of passers-by are happy to give advice – presumably, all fully trained volunteers at the 1-800-OPINION hotline.

Asking the taxi driver whether he has a business card, Connor is told that maybe the police should be called, only to reply: “I don’t talk to police.”

Later, he tells the driver: “You’re the professional in this situation, so you should know better than to park next to the bike lane because, quite frankly, you could be reasonably assured that someone’s going to open the door if you have a fare in your cab.”

One man breaks off from chomping on a bag of crisps to tell the cab driver: “You’re supposed to pull over to the side, you know that, that’s the rules. The rules are very clear, bud, you’re in the wrong.”

Meanwhile, in London, Green Party politician Jenny Jones, elevated to the House of Lords last year, tweeted about how she had been left bruised this morning after being doored. She wrote: “IDIOT opened a car door into me. Swerved, but hand/arm bruised. Driver: 'Sorry, sorry, we were stressed.' Yeah, well, now I'm stressed too.”

Meanwhile, back in Gotham City – well, New York – Connor tells bystanders: “The only reason I’m cheesed about it is I get tickets for not riding in a bike lane… and… this is why I don’t ride in the bike lane; you get it from all sides.”

The problem of being wrongly fined for not riding in New York City’s bike lanes because of hazards including parked vehicles or trucks making deliveries was highlighted in this slapstick video from Casey Neistat – which now has more than 13 million views on YouTube.