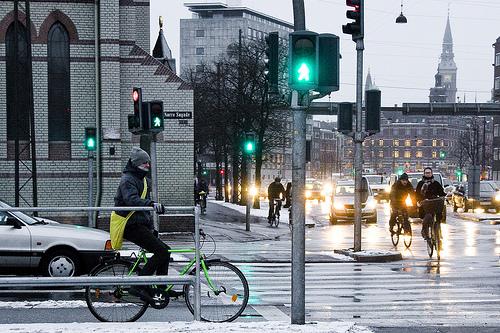 But would they work here?
by Simon_MacMichael

If you’re online and you follow developments in urban cycling, chances are at some point you’ll have stumbled across the Copenhagenize.com blog.

The Danish capital is rightly viewed as the world’s leading cycling city – a third of its residents use bicycles each day to get to and from school or work, a level of participation that cycling advocates elsewhere can only dream of – and as a result, the blog regularly features plenty of bike-friendly features that you just don’t find anywhere else.

One that it highlighted recently is a railing, specifically designed for cyclists, that incorporates two horizontal bars, one at arm height, the other conveniently positioned to act as a foot rest, to allow cyclists to remain in the saddle while waiting for the traffic lights to change.

A message on the footrest reads, "Hi, cyclist! Rest your foot here... and thank you for cycling in the city," which sees city authorities engaging with cyclists, an initiative itself suggested by Mikael Colville-Andersen, the founder of Copenhagenize.com.

Writing about the foot-rest-cum-railing, Mikael says: "It's a tiny detail. No bells and whistles, just a simple idea to make a tiny fraction of the day a little bit easier for a small percentage of the cycling citizens of the city. Which is precisely why it's brilliant."

While anyone on a fixie who has perfected the art of the trackstand may shrug their shoulders – hopefully without overbalancing – little touches like this are welcome for most of us who would otherwise have to hold onto a friendly lamp-post, assuming there was one within reach, or otherwise plant one or both feet on the ground.

One issue, however, is that what works in Copenhagen, where cyclists are accepted as an integral part of traffic and given space by motorists – most of whom will of course be cyclists themselves – may not work in the cut and thrust of London traffic.

Railings at junctions are regularly cited by cycling organisations in the UK as a danger to cyclists, especially when combined with left-turning lorries, which have been the cause of numerous fatalities in recent years, above all in London and particularly involving female cyclists.

But the bike-friendly railings in Copenhagen bear little resemblance to the cage-like structures found here which offer trapped cyclists little in the way of escape route, and indeed which are now being removed at junctions such as Oxford Circus.

For a start, their locations on traffic islands mean that they are intended for cyclists planning to carry straight on, and are therefore ideally positioned in a city where bike riders are an integral part of the daily flow of traffic.

With many of Britain's cyclists feeling that they have no option but to hug the kerb, even if they intend to go straight ahead - again, a contributory factor in accidents where bike riders are struck by vehicles turning left - is it a forlorn hope that this Danish design could be deployed here to provide a solution for Britain’s cyclists looking for somewhere for them to rest their arms and feet?