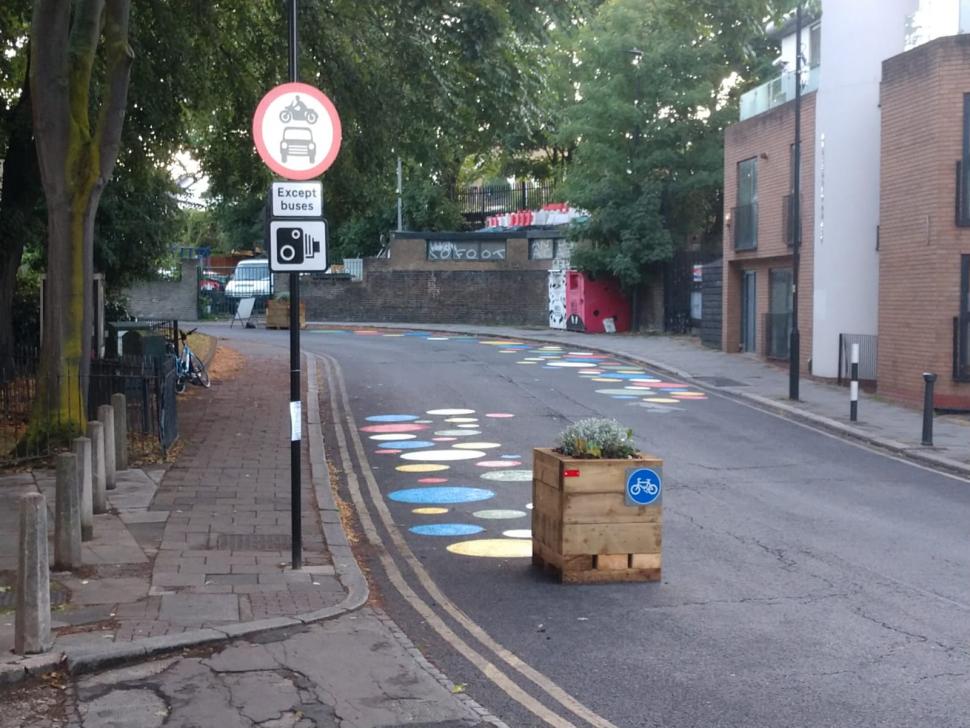 "Lockdown opened the country’s eyes to a different way that streets could be," say campaigners...
by Simon_MacMichael

More than 100 organisations have signed an open letter supporting Low Traffic Neighbourhoods (LTNs) as protesters against such schemes, which are aimed at retaining access to residential streets for the people who live there while blocking rat-running drivers aiming to avoid main roads, continue their vocal opposition to them.

Joining local residents’ groups that are supportive of such schemes in signing the letter are organisations including London Cycling Campaign and Scotland’s Pedal on Parliament, plus 20’s Plenty For Us, the Brighton & Hove Green Party and Coventry’s Bicycle Mayor, Adam Tranter.

As we reported last week on road.cc, one scheme in Northfields in the London Borough of Ealing had planters, designed to restrict access to certain streets, vandalised, overturned and even moved within 24 hours of them being installed.

While LTNs have been around for decades, local authorities in the capital and beyond are using emergency active travel funding from the government to roll more of them out.

The letter, published a week after the Bike Is Best campaign which unites more than 50 cycle brands and organisations, wrote to Prime Minister Boris Johnson to warn that delays in implementing infrastructure projects and local authorities caving in to opponents of such schemes risked wrecking his vision of “a new golden age of cycling.”

We, the undersigned, wish to express our support of Low Traffic Neighbourhoods tackling congestion on residential and main roads and give our thanks to the local councils who are working to ensure our streets are safe for everyone.

Lockdown opened the country’s eyes to a different way that streets could be -- places that welcomed walking, cycling, and socially distanced cups of tea with neighbours. Roads were transformed from dangerous thoroughfares to playgrounds for local children. As lockdown eases and communities all over the country re-open, it would be devastating for our communities if everyone abandoned public transport and started driving private vehicles instead. Now more than ever we need safe and spacious routes for walking and cycling to stop the air and noise pollution, and danger that traffic inflicts on our neighbourhoods. That’s why we welcome the leadership of councils who are working tirelessly to make sure changes to streetspace aren’t lost as life returns to normal.

Low Traffic Neighbourhoods, when designed well, massively reduce motor traffic, allowing kids to play outside and local residents to walk and cycle more, with less dependency on their cars. In the few weeks since Salford introduced their Low Traffic Neighbourhood trial, reports are already circulating of families taking to the streets on their bikes, delighting in the new space. And in more established Low Traffic Neighbourhoods like Waltham Forest in London, residents have seen transformative changes to the school run. Once traffic is removed from side streets, vulnerable road users can travel safely on foot, benefiting the whole community, not only those that live there. Low Traffic Neighbourhoods are one of several vital approaches needed to reduce car dependency, and combat climate change, air pollution, obesity, road danger and more. Where they’ve gone in, shops and cafes within the scheme have seen huge footfall increases, while shops on the edges have done well too.

We hope this is just the beginning of an ambitious plan to transform our streets for the better -- with speed reduction, safer crossings, anti-social parking enforcement, protected cycle lanes, controlled parking zones, an increase in cycle parking, parklets, and other incentives to reduce car ownership. We support Low Traffic Neighbourhoods that reduce congestion and air pollution on residential and main roads and we call for more local councils to work with residents to implement them.

Here is the full list of signatories to the letter: