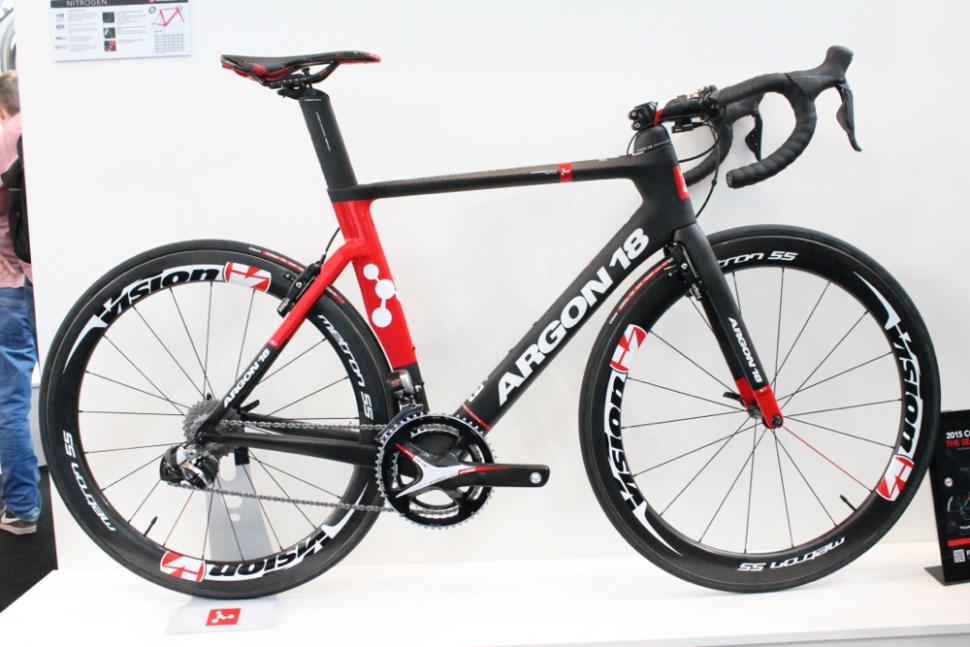 Argon 18’s new Nitrogen is one of the new breed of lightweight aero road bikes, the frame coming in at a claimed 960g.

We first showed you the Nitrogen last week but we didn’t have full details at that stage. Now we do.

Aero bikes have been getting lighter recently with several dipping under the 1kg mark. NeilPryde, for example, claim a weight of just 920g for their new Nazaré2, although direct comparison between different brands is difficult because they don’t all weigh the same size frame (and, let’s be honest, manufacturers’ weights aren’t necessarily accurate). 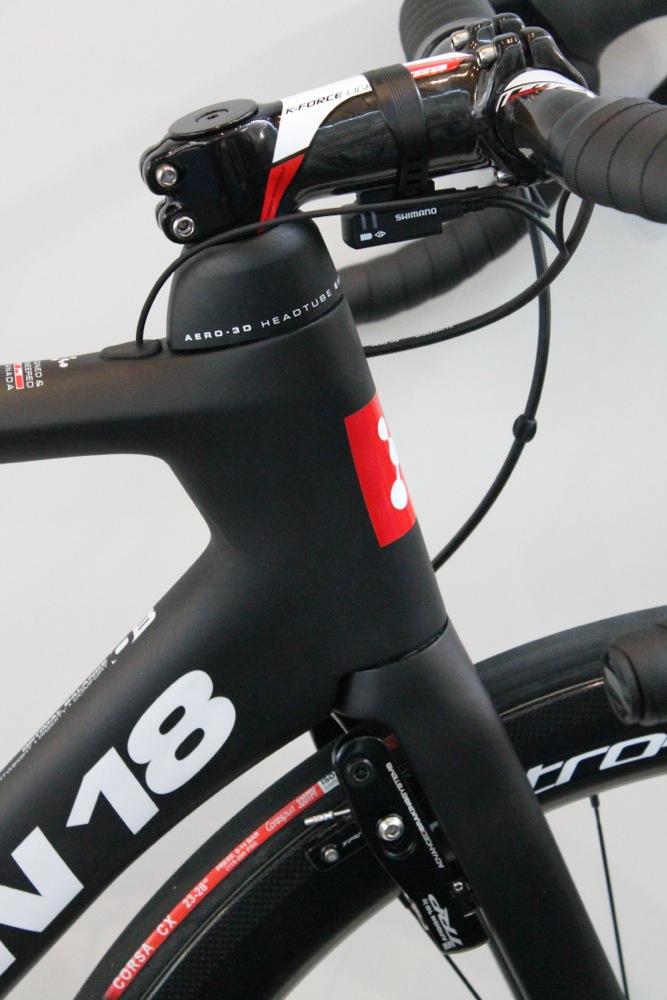 Of course, weight is more of a side issue on an aero road bike. All other things being equal, you want a lightweight bike but aerodynamic efficiency is what the Nitrogen is all about.

With that in mind, Argon 18 use aero-section frame tubes throughout with a down tube that’s shaped to shield bottles from the wind and a cutaway seat tube to manage the airflow over the leading edge of the rear wheel.

The seatstays sit wide, coming out from the sides of the seat tube rather than the back, and the arms of the TRP linear pull brake sit neatly in line with them to minimise drag. You can choose from three different heights: 0mm, 10mm and 20mm. The advantage over a conventional set up, according to Argon 18, is that the larger diameter means more rigidity. Plus, they can make the 3D system aero whereas a traditional spacer is, of course, simply round. The legs of the monocoque carbon fork are slim and, like the chainstays, they shelter the arms of a TRP linear pull brake. The fork crown is integrated into a slightly dropped down tube to manage the airflow in that region. The Aero SP5000 carbon seatpost is reversible, offering seat angles of 72° and 76.5° depending on which way around you set it. You can also move the position of the clamp on top of the post so that the nose of your saddle sits right above the bottom bracket. The idea is that you can either have a conventional setup or steepen it considerably for triathlon.

As is usually the case with aero road bikes, the Nitrogen has a wedge-type seatpost clamp that’s hidden away inside the frame and a bolt that sits flush with the top tube, and the cables run internally.

The new Bora-Argon 18 team will be riding the Nitrogen in World Tour races next year.

Argon 18's UK distributor is i-Ride. They expect the Argon 18 Nitrogen to be available from October. The frameset will be £2,099.99 and a complete bike built up with a Shimano Ultegra groupset will be priced at £3,499.99.