Yes, THAT Lightweight...
by dave atkinson

There’s always lots of electric bikes at Eurobike. Lots and lots and lots. From folding bikes to road bikes to mountain bikes to fat bikes, everything gets a motor fitted by someone. One place we weren’t expecting to find one, however, was the Lightweight stand. You know, the purveyors of German carbon über lightness that make the posh wheels and the Urgestalt frameset. 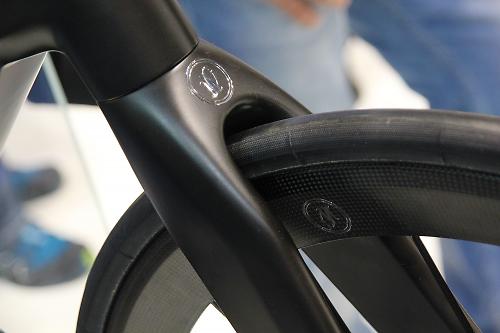 But there it was: the Velocité. We spoke to Lightweight’s Frank Jeniche about the bike, which is a collaboration between Lightweight and Dresden University, funded by a German state project on urban mobility.

“We did all of the design stuff, everything in carbon fibre”, he told us. “We were also responsible for the motor design and management. One of the institutes [at the University] was a specialist in electronics so they helped us out with that. One of the other institutes was a specialist in carbon fibre testing, so that was their part. In the end what we have here is a technology demonstrator that shows what could be possible in the future.” 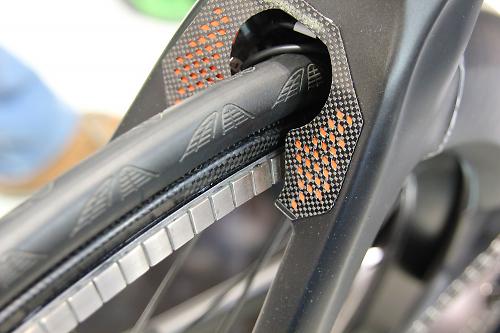 It’s a striking-looking machine. At first look it seems as if it doesn’t have a seat tube, but in fact the tube is wrapped right around the wheel from the top tube right to the bottom bracket. This isn’t just for the sake of the looks, either: the bike uses an entirely different propulsion system to any other e-bike we’ve seen.

The rim of the rear wheel is completely covered with magnets on either side, and a series of coils within the seat tube act on the magnets to propel the bike forward. The wheel of the bike is effectively acting as the rotor in the motor. There’s no need for reduction gears or other transmission parts that wear out, and the system can save a lot of weight as a result. The bike is powered by a battery hidden in the down tube. Jeniche told us that the battery was a new technology too, but wouldn’t expand on that. 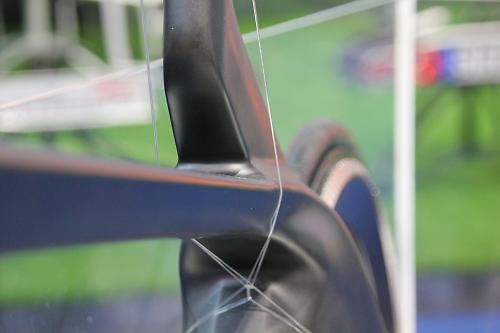 “We’re talking about a bike that weighs 14.5 kilos. If it were to come to production we could easily rip a kilo out of that”, Jeniche told us. “The motor is limited to 500W, and we’ve categorised it as an S-Pedelec [maximum speed 45km/h], but there’s lots of tuning potential: it could go to at least 80km/h, maybe up to 100. We’re talking about a stylish design, a sporty geometry. We are Lightweight. We don’t want to have a super-long-wheelbase, nasty-looking, heavy bike. That’s not us.” 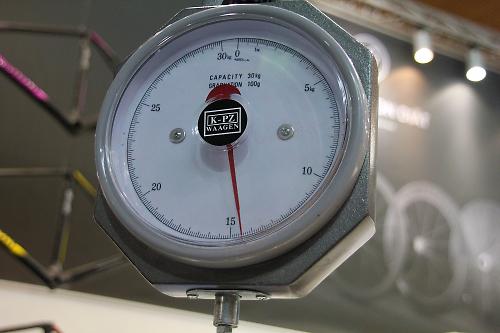 And is the bike likely to make it into production? Probably not in this form, but the Velocité isn’t designed as a product prototype, it’s exploring technologies that Lightweight reckon could well be viable down the line. “We’d like to deveop the whole technology further”, Jeniche said. “This is the first public attempt and we’ve had a lot of reaction. We’ve talked to engineers from the bicycle industry, from the motorcycle industry, from the car industry… If you see that UPS, for instance, have started a pilot project to use e-bikes to replace vans for city deliveries: something like that could be possible with the technology also. We’re open to that. We’re not just a wheel company.”